Those of you who read my BackyardTNR blog have already met Bert. I thought I might share his story here too, party because I need to process all that is happening. Be warned; although the beginning of this story is delightful, the ending is heart wrenching.

Back in June, I was involved with a large TNR trapping project. In the end we trapped 28 or so adult cats and 20+ kittens. Several of the adult cats needed to be euthanized as there were lots of sick cats who were suffering. At the spay/neuter clinic each cats gets a thorough physical examination, in the process of that exam, several cats had teeth fall out when their mouth was inspected. Sadly, there isn't a good caretaker watching over these cats, so they are mostly fending for themselves.

We used the wildlife camera to monitor what cats were coming around so we could tell who still needing trapping. Well, one day I notice this guy: 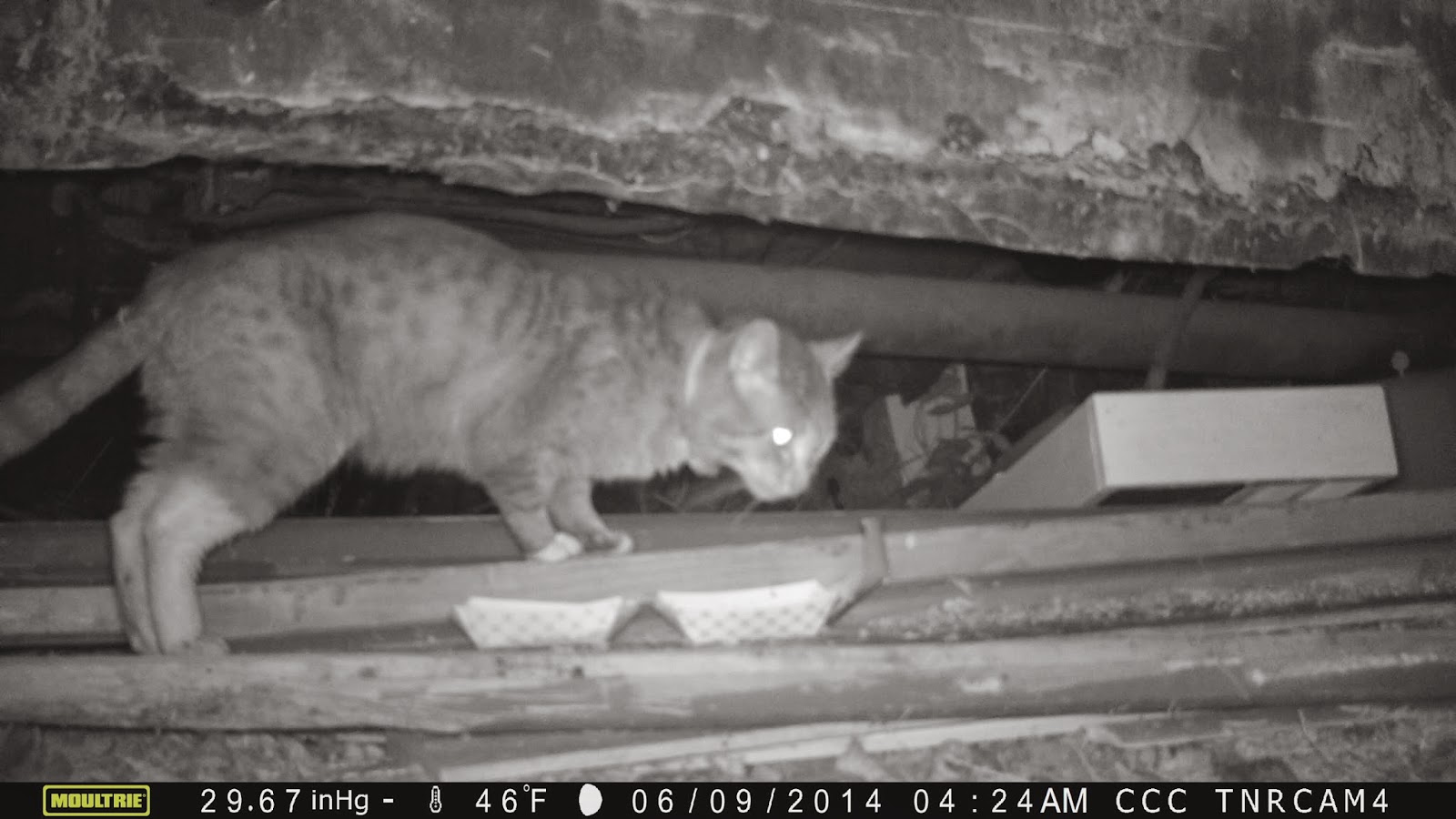 A brown tabby cat with a collar. 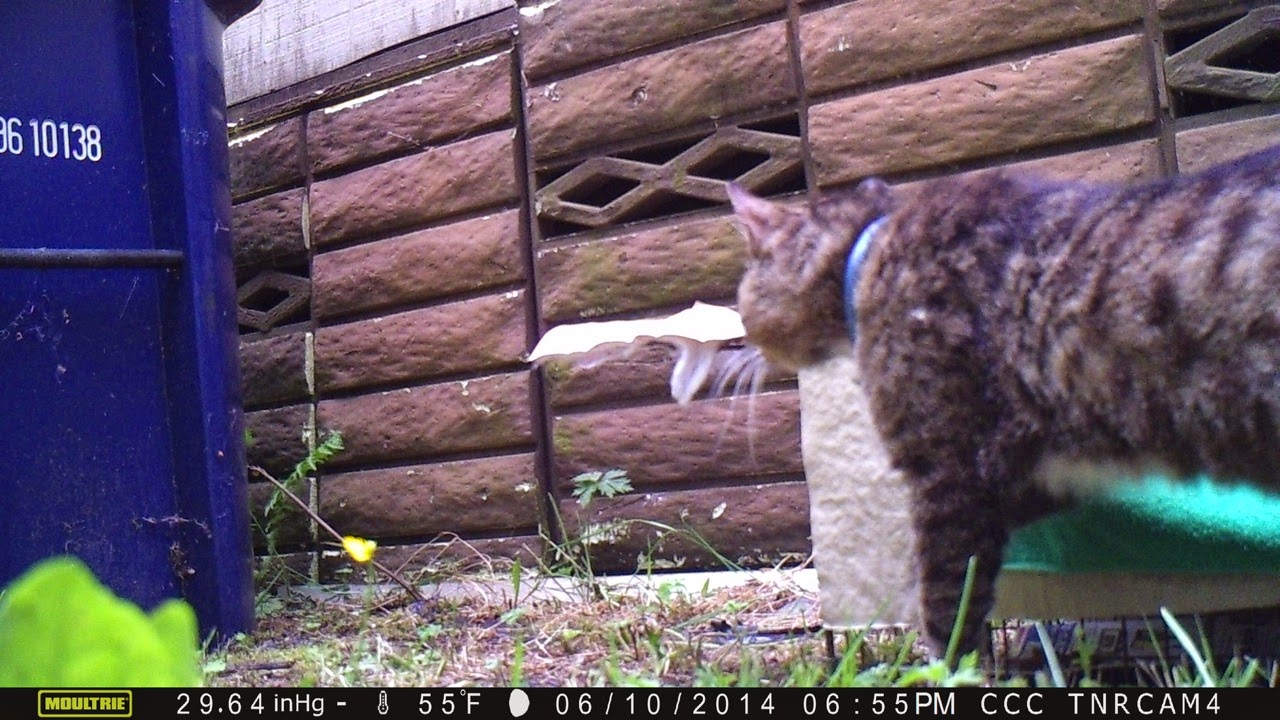 The collar told me this cat was once owned and was probably abandoned. (I suspected abandoned because we talked with all the people who lived in the neighborhood and no one claimed to own this cat.) We went about trapping and he kept not going in the traps, but instead would rub against the doors and close them! Argh! Eventually, we got him. The collar he was wearing was a very old flea collar. All the fur around his neck under the collar was missing.

After his trip to the neuter clinic, he seemed somewhat friendly. I decided to work with him to re-socialize him and re-home him, after all what would I have to lose? If he didn't come around in a few weeks, I could bring him back to the site. The first day I released him into my holding pen in the garage this is what happened: 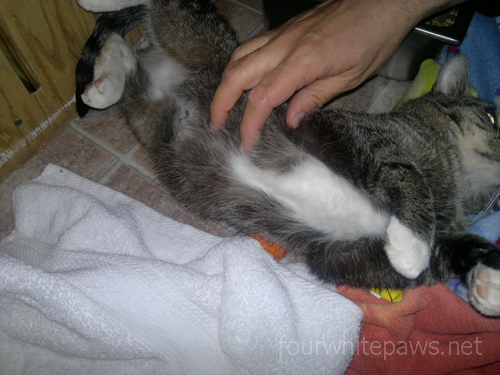 Purrs and tummy rubs! I figured this was going to be easy. I noticed when I was rubbing his tummy that his tummy felt oddly hard, something I've never felt before. I didn't think much of it, figured it was worms.

His sweetness didn't last. Sometimes when I visited him he was standoffish. He became very adept at swatting me with his paw. With his razor sharp claws it hurt! He even started nipping me. After a number of weeks and little progress I started to think I was going to need to bring him back to the site. At least he knew the space and had some sort of routine. Just as soon as I made up my mind to return him, he became super lovey and sweet again!

This pattern went on for over a month. At least four times I was ready to bring him back, even got as far as starting to put him into the carrier when he would purr and become super affectionate. How could I release such an affectionate cat to a life with no human touch? I couldn't do it! 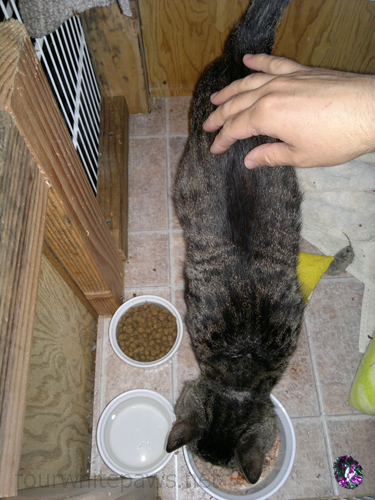 You can see the collar mark around his neck. I've had him now for almost seven weeks and a lot of fur is still missing. 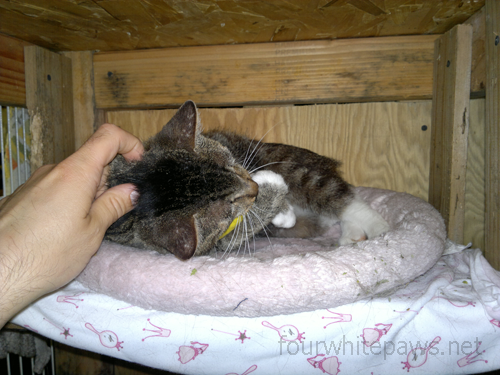 I learned that rubbing him just behind the ears was his weak spot, he turned to kitty putty. I even avoided a swat by discovering this just in time, his paw was mid swat when it stopped in the air just as I started rubbing behind his ears.

A friend who worked on the TNR project with me came over and helped me trim his claws. After that moment he nearly stopped swatting me, it was like he knew it was pointless if he didn't have his razor sharp claws to slice and dice me! A few weeks after that claw trim, he let me pick him up. 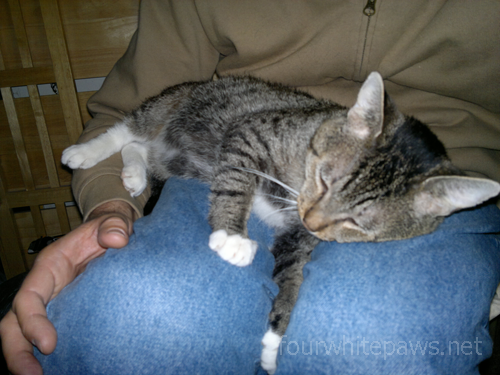 He even melted into a puddle of kitty putty in my lap! I was so delighted with the progress, I figured it was time to list him on Petfinder and find him his perfect home where he could get as much human loves as he desired.

Meanwhile, I started letting him out of his cage more so he could explore and play. 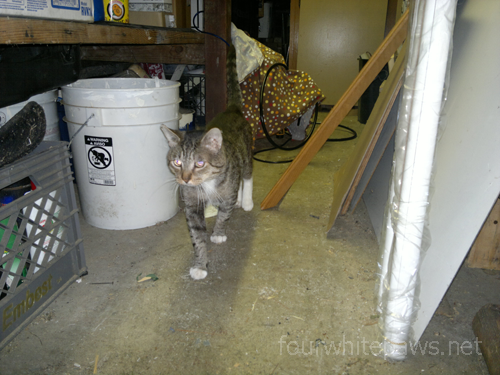 He loved the freedom!

Play was more of a challenge. At first he was cautious and unsure, but after a few minutes he seemed to remember how play works and he went crazy with the feather toy. 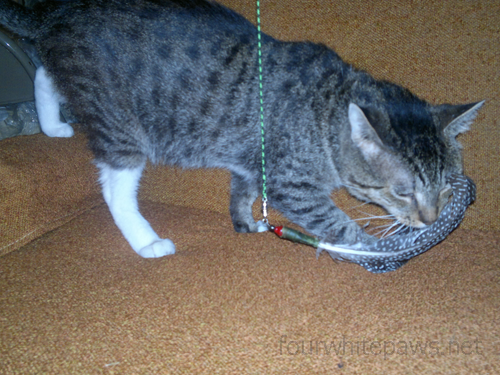 Sweet Bert had been abandoned and forgot what human touch and play was like. Now, having rediscovered both he wanted more and more. 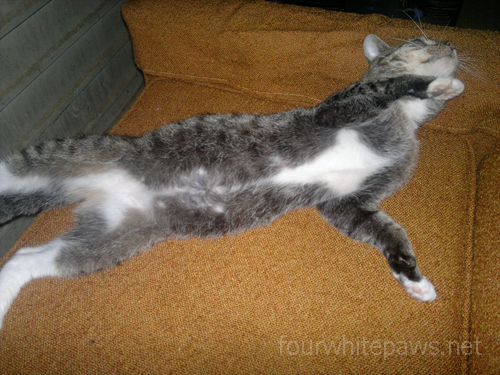 He always wants his tummy rubbed or is smashing his head into my hand wanting me to rub his head. What a love! I'm such a sucker for affectionate kitties. 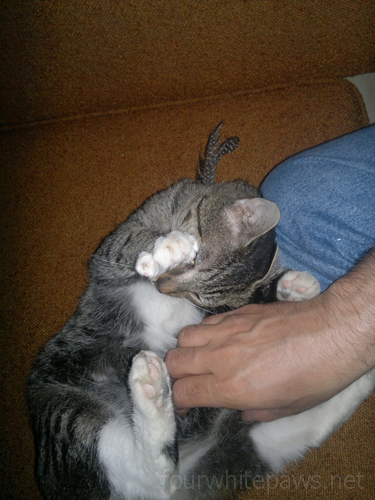 It's like he's making up for lost time with the human touch.

Needless to say, he completely stole my heart. This cat is a total love bug.


Over time I became more concerned about his hard tummy. He had been dewormed and that didn't make a difference to his tummy. He also has had ongoing diarrhea which was concerning. His appetite remained strong and he drank lots of water. He tested negative for FIV/FeLV (Yah!!) With the diarrhea and hard tummy, I wanted him to be looked over by the CCC's contract vet.

On Monday he got that chance. The vet thinks he's about 5-7 years old and looks generally to be in good shape. She felt around his abdomen and found what she believes is a large intestinal mass, something bigger than a golfball. She recommended exploratory surgery and euthanasia if her determination of a tumor was verified. My heart broke - oh Bert! You just rediscovered human love and now this...

All week I've been wrestling with what to do. I've done research on options. Today I asked my vet her thoughts about prognosis of cats with intestinal tumors and she told me exactly what I did not want to hear, prognosis is very poor. Apparently cancerous tumors really like to grow in the intestines. Successful surgery would only give him additional months. That's a lot of pain and suffering not to mention dollars, for a few months.

Now I'm considering getting an ultrasound done so the vet can determine if it's really a tumor or possibly an obstruction (fecal, foreign object, etc.) If it's a tumor then the focus become palliative care. If it's something else then we consider other options. Odds are very high it's a tumor.

My heart hurts beyond belief. Bert was just getting a second chance at living the life he deserves but it looks like that will be cut way too short. He's so affectionate, so sweet - always wanting to be petted. He's like a sponge for love, as he makes up for lost time. I'm so immensely thankful that I did not release him back to the site where he was trapped where he would have died a miserable, painful death all alone, void of loving touch. 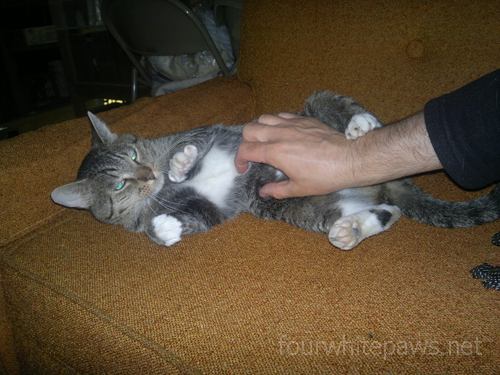 I am beyond emotionally exhausted by all this. If anyone has any ideas of what I can do for Bert, I would love to hear them. And please, please, please be praying, purring, or whatever else you do for him.
Posted by The Cat Guy at 12:39 AM