Bert went to his new home on Sunday.

He travels really well, he sits and watches or sleeps.

I brought his cat tree (on loan) so he would have familiar space to help him transition.  He took to it immediately, and climbed up. 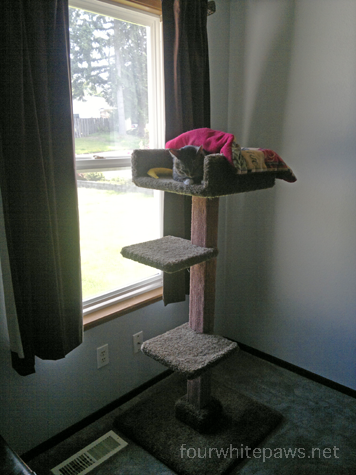 He didn't do much looking around, just hunkered down. I got the sense he knew what was going on and was sad. 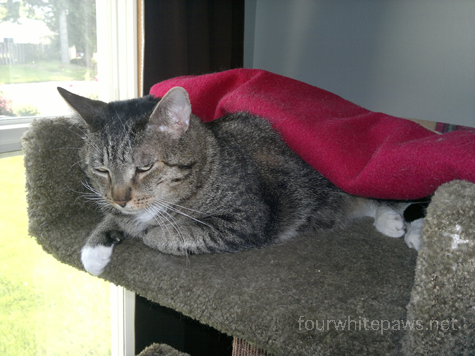 There are two older dogs that live in the home, soon they will all be good friends.


Leaving Bert was hard, really, really hard. We've journeyed far together over the last year. When I trapped him, he was wearing an old collar, so that told me he had been friendly at some point with someone. But he had been on his own for a long time, so we had to earn each other's trust. He seemed to love being petted but would always end with a nasty bite or a full-clawed swat when I withdrew my hand to go. I almost gave up on him on several different occasions, even going so far as to get the carrier out in order to return him to the trapping site. But each time the carrier came out, his aggressive behaviors immediately went away and he rolled over and wanted his tummy rubbed. I couldn't do it. I later realized his aggressive behaviors were probably coming from a place of fearing he was going to be abandoned again. He adored the affection and never wanted it to end for fear it would never return, as had been his experience.

Then early in our relationship, I felt like I was going to lose him. I could tell something was wrong with his abdomen as it felt like he had a hard mass in there. The rescue vet did a quick physical exam and she diagnosed him with an intestinal mass, she recommended exploratory surgery. Thankfully, a second opinion provided a more optimistic and treatable diagnosis of Mycoplasma, which we treated and he healed up beautifully. 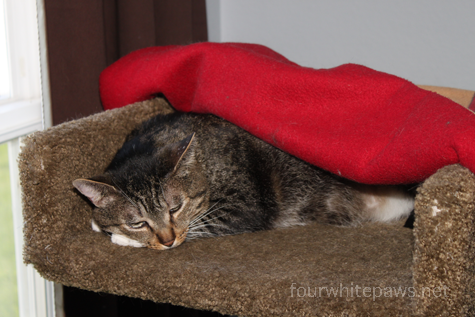 Bert is a very special soul. Some cats just kind of go through life pretty unaware and aloof, but Bert is a wise, deep souled cat. It's easy to fall in love with his ways. I have grown quite attached to him, enjoying his fun playful nature and many cuddles. I knew giving him up would tear me to pieces but I also knew it had to be done. It helps to know his new human adores him and is super excited to have him be part of her family, I'm thrilled with the home he landed. Bert will certainly be adored and cherished. Knowing that is great and helps a bit, but overall, it still hurts like hell to say goodbye.

Seeing him stressed and sad as I left, tore me up. I did my best to communicate to him what all was going on. I know this is a transition time, a stressful time that will pass, I know that, but my heart still hurts seeing him stressed. As I was leaving, I was petting his head and he gently put his paw on my hand as I slowly withdrew it. I lost it.

I felt terrible for sobbing, but there wasn't much I could do about it, the emotion was overwhelming. I felt terrible for putting Bert's new human in the awkward space of feeling thrilled and excited for getting Bert and feeling awful like she was prying someone's baby from their hands. I'm thankful for her graciousness and understanding. And thankfully, she did grant me visitation rights! We already have our first visit planned for a few weeks out.

I realized in writing this post I came to understand the deep significance of Bert's gentle paw on my hand before I left - he was closing the circle. It tells me that he understands what's happening. Unlike at the start of our relationship where he would aggressively bite and swat when I left the room, he now knows he's loved and that he's not being abandoned. He's sad, but he's also grateful. Everyday I felt his gratitude for being rescued and once again that gratitude was there. This knowledge helps settle my heart - you're one amazing cat Bert. I will always love you.

Be well my Bert-man and enjoy your new home! I look forward to visiting with you soon.
Posted by The Cat Guy at 10:57 AM