Here's the latest on Theo...

Our regular vet had done a bunch of diagnostic work and was thinking Theo had a cancerous tumor on his pancreas. She recommended we go see a specialist for a second opinion. We took Theo to the internist a few weeks back. She looked over everything and ruled out the tumor on the pancreas and instead was concerned about a possible neurological issue. She was also concerned about his heart disease and if it might not allow us to pursue neurological related diagnostics. She referred us to a cardiologist and neurologist for further work up. 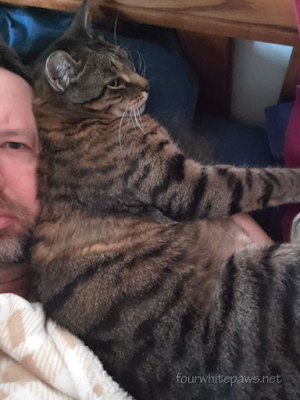 It's been hard not knowing what's going on, while seeing clear signs that Theo is not well. He hasn't been himself for awhile now. He typically was very athletic and agile and now he struggles to jump and sometimes trips when walking. He often climbs the stairs very slowly and deliberately. When he's not super clingy, always wanting to be held, then he's pacing and very unsettled. Sadly, we had to wait a few weeks before getting in with the neurologist and cardiologist.

This morning we drove down to Massachusetts at a veterinary specialty hospital outside of Boston (sadly, not Tufts this time). Theo did great on the drive, but was unsettled, trying to pace in the car. 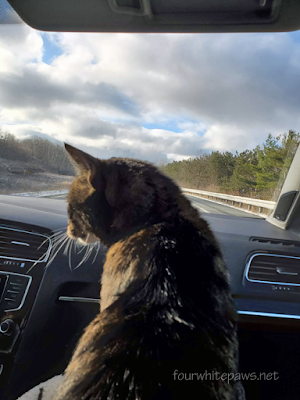 Theo got an EKG from the cardiologist. The results were pretty positive, heart shows signs of heart disease but it's not major concern. That meant Theo could receive anesthesia so he could get a brain scan. A few hours later, the neurologist called and wanted to meet so she could show us the scans - we knew that wasn't a good sign. She showed us several images that clearly depicted a very large tumor (meginonomia) on the top center of his brain. The mass was alarmingly large. She notes it's probably been slowly growing for over a year now. Because it's growing on top, it's also growing in the space between the two brain hemispheres. She noted removing a meginonomia is often not difficult, but because of where it is, there is higher risk of hemorrhage.

The options are steroids to try to shrink the tumor a little and would give us a little more time, however, the steroid treatment would worsen the heart disease. The other option is surgery to remove the tumor. She noted when she's done this surgery on cats with tumors in the location where Theo's is, sometimes it has gone well but other times there is hemorrhage and the cat dies. If the surgery goes well, then we can potentially have Theo for a number more years and he would be more of his usual self. She strongly suggested, if we opt for the surgery, that it take place right away.

After considering Theo's decline and remembering the experience of Willow's brain tumor, we elected surgery. He undergoes brain surgery tomorrow (Thursday) afternoon. He's such a delight it's hard to imagine him no longer being with us. As you can imagine, we are both very worried about him. 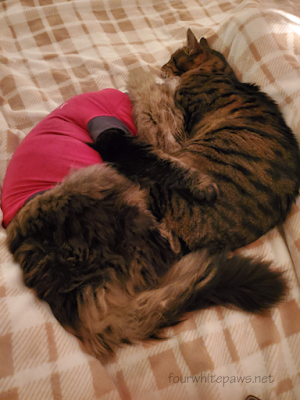 Nahum cuddling with with Theo last night, like he does every night.

Please purr for him, that surgery would be successful and he makes a full recovery. I'll let keep you posted on his status. Thank you.