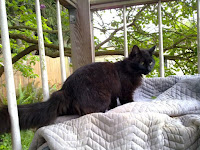 I have written in the past about my childhood dream to rescue all the homeless animals and provide for all their needs. I am again faced with having to wrestle with that dream and limits such as finances and time.

Over the past few months I have noticed a new kitty in town, a small black long-haired one. Initially I saw him around a two-block area. Then in the last few weeks, we had a warm night and the black kitty was on our front porch roof! He was siting up there talking with our cats through the screened window. Everyone seemed to be getting along well and they were all curious about each other. I speculate that he was more interested in Willow but maybe not. 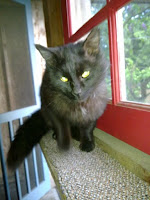 The next day he appeared on the roof of the kitchen, staring into the upstairs window. He was eager to visit with our kitties. We learned from a neighbor a few blocks down that he was a stray and had shown up in January. Apparently the neighbor had been feeding him. Between his more frequent visits and the recent cold rainy weather I figured he could use a comfy kitty spot. So, I fixed up the metal pokey on the back porch so he could get out of the wind and have a soft spot. I also provided food and fresh water. He gobbled the food and in a few short days I was able to pet him.

He seems to have a sweet nature to him and he has beautiful yellowish-green eyes against his jet black. He enjoyed the petting and rubbed his head against my hand many times.

Tonight I noticed he appeared to have a slight limp. He looks rather mangy - he must have fleas or some other bugs that causes him to itch. I figured it would be good to bring him to the vet so they could make sure he was not suffering and turn him over to the animal shelter. I was nervous about picking him up in case he bit or scratched me, but he did neither. He settled in my arms like he was used to be carried around. 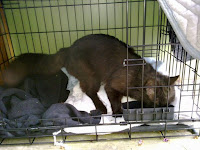 He is currently at the vet and I am torn up inside about letting him go. I want him to have a good home. I also want to be financially wise. Do I dare take on another cat?! Or do I trust that he will make it through the system and find a wonderful forever home. Can I really rescue every animal in distress that shows up at the door?
Posted by The Cat Guy at 2:15 AM