Today, I crossed another line.

It is a little too early for there to be a daily supply of naturally occurring quality moths for Willow to hunt. Perhaps the cold nights don't agree with the moths.

A few days ago, I was over at some friend's house and I asked them if they had any moths to spare. I planned ahead and even brought a container with me. We turned on the outside lights, gave it a few hours and then went to see what was available. There was only one weenie bug and it managed to escape from the container before I got back home.

Today, when I was at the cat store, I purchased some live animals for Willow to hunt. Two crickets. I had very mixed feelings about crossing this line, but I went ahead with it. 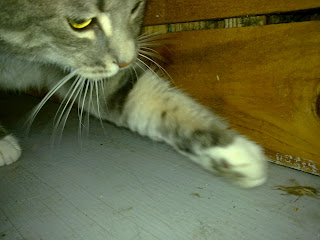 I knew they wouldn't provide her the same satisfaction as moths, but I figured it would be better than nothing.


Upon returning home, I released them for her on the porch and she went right after them. It wasn't much of a hunt. She played with one for a bit, pawing at it, trying to get it to move around. After a few minutes, she tired of the play and ate half of one. She left the other half, perhaps a commentary on the taste of cricket versus moth. Theo happily snarfed up the other cricket.
Posted by The Cat Guy at 9:29 PM