Odyssey's not feeling very well and needs your purrs. 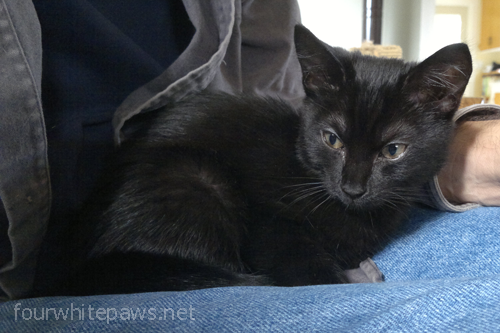 After consulting with some cat rescue folks we decided to try to administer sub-q fluids and amoxicillin. In the last 9 months of Max's life we had gotten rather adept at "juicing" Max, as we called it then. It has been quite a few years, but we figured it would all come back to us.

Well, Max was a giant compared to this little girl. So that little needle when held next to Odyssey sure looked like a massive needle. I couldn't hold her still and with her wiggling and screeching and that needle sticking in her - yea, you get the idea - not something I want to be in the same room with. After many failed attempts, we called for help - and Sue came right over even though it was nearly midnight. (Thank you Sue!!!)

Not much change this morning, still no interest in food and just wants to sleep. We took her temp again and it was 105.4°F (40.8°C) - it's going in the wrong direction. She expressed interest in Laura's breakfast, so she got a little bacon and eggs. She enthusiastically snarfed that down, lets hope it stays down.

She's super cuddly and really loves sleeping on one of our laps. And her purr motor seems to be working just fine as she purrs and purrs.

Please pray, purr, or whatever you do, for Odyssey's well-being. We are all worried about her.
Posted by The Cat Guy at 12:07 PM