I had some reading to do for work this morning, so I went out to the garage to hang out with Bert. I think he liked the company. 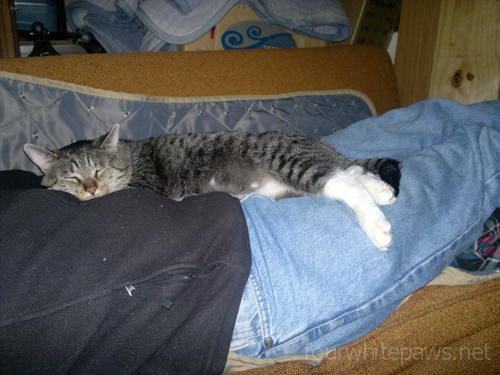 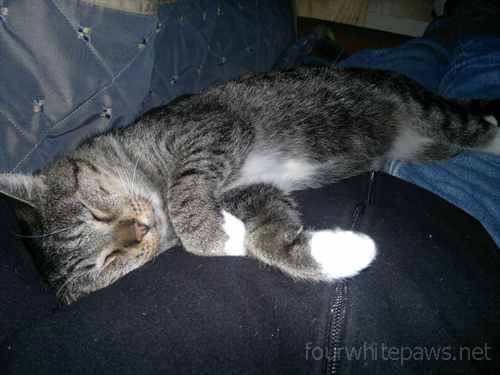 When I look at these pictures of Bert, I think about how I was so close to releasing him back to the TNR site because he was bitey and swatty. I'm so grateful I gave him more time as he really turned a corner! Hopefully he's destined to be a spoiled inside kitty for the rest of his life. 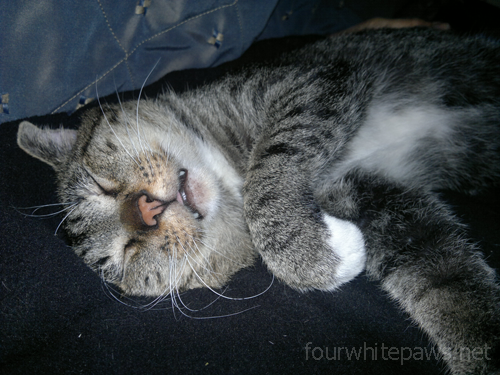 Buddy's slowly going downhill. His age is catching up to him as evidenced by a number of little things. He eats as he always has (like a horse), but he's slowly losing weight. He feels and looks frail. His back legs are very unsteady and tremble. He's starting to hork more. And he's been sporting that "I'm not feeling so good" look. I think I may make an appointment for him to get some diagnostics. I would appreciate purrs for his wellbeing. 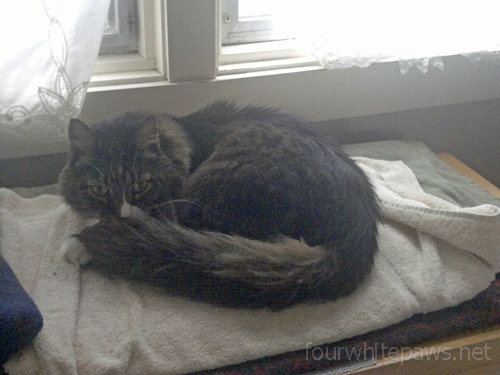 I recently bought Buddy another heating pad. He's got two now and I'm about to get him another. He needs one for each of his favorite spots. 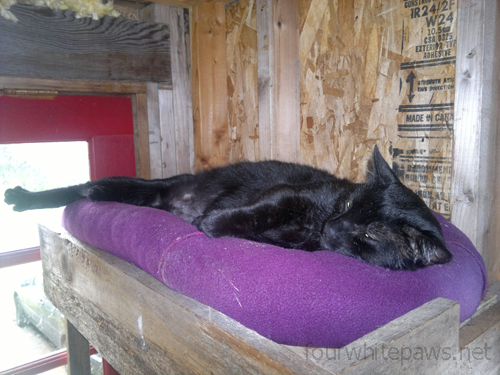 Oliver enjoys sprawling in his heated loft bed on the back porch.

I heard some very sad news today. John, a friend and fellow TNR guy who caretakes a small backyard colony of black feral cats, lost one of his beloved cats today. Apparently Uncle got hit by a car in the road. Breaks my heart to hear of a loved feral passing away like this. Even more sad is that John was making great progress taming Uncle and had visions of him becoming an inside cat. Rest in peace sweet Uncle, know you are dearly loved.

John's beautiful feral family: Grandma, Little Mama, and Uncle all posing in front of their heated and insulated home that John built for them.
This news significantly heightened my anxiety about Oliver and his family being outside. We live near some busy roads. Every day I see them alive and well I give thanks for another day. 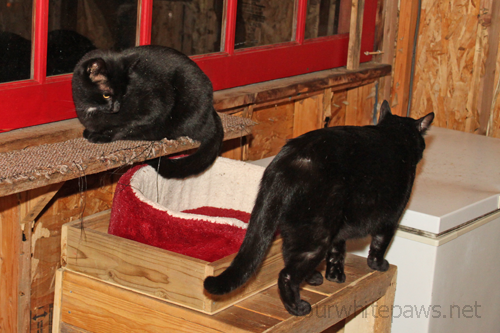 Over the summer I've been locking Oliver on the back porch at night for his safety. If I don't, he'll go roaming and pick fights with neighbor cats. A few months ago, Pierre decided that he wanted to be locked on the back porch with Oliver every night. After Oliver is secured, Pierre shows up outside the screen door and waits to be let in. I love having both of them secured each night, that way I know they are both safe. I only wish MK and Nora would join him! 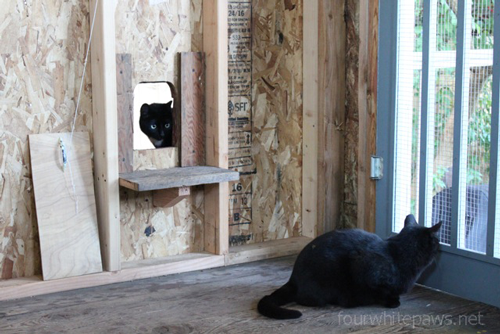 Fulfilling Pierre's wish posed quite the logistical challenge due to the fact that he's still semi-feral and keeps a distance from me. The solution involves the use of fancy technology - a string! It's tied it to the handle on the guillotine door. The string goes up to the ceiling and across the room to the mudroom door and back down. When it's time to lock Oliver away, I close the guillotine cat door by hand and then go over to the other end of the room and pull the string which opens the guillotine door and Pierre hops right in!  Old school but it works.
Posted by The Cat Guy at 1:46 AM