We've covered some distance since the last post, having made it from Utah to St. Louis, Missouri, with a two day stopover in Denver to visit some old friends we knew from when we all used to live in Vermont.

I mentioned last time how pleased I am with how the cats are doing. They have really settled into the routines and are doing so well. It's such a huge relief that they are adapting so well. They were afraid at first but as the trip goes on, they are settling in and adapting. Their resilience and ability to adapt is inspiring me - I so want to be that adaptive too.

We ran into more snow in Wyoming. 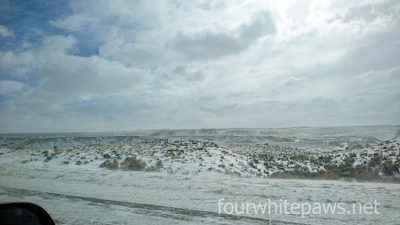 The snow looks prettier on the horizon than on the road.

Here is what the cage setup in the minivan looks like. The cages are side by side, covered with sheets. The cages in the back have the litter boxes and are accessed through the back door. 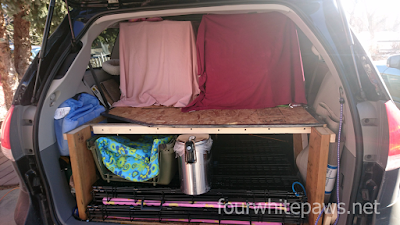 A look inside front of Oliver and Pierre's setup. 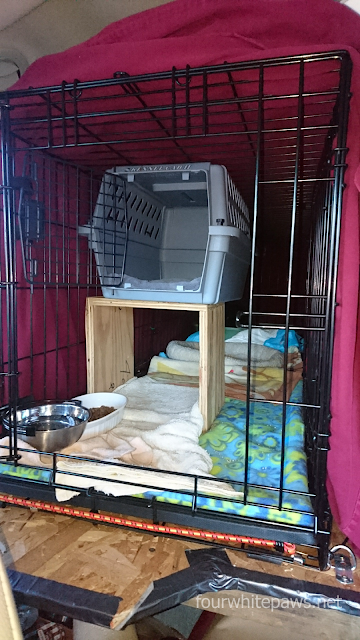 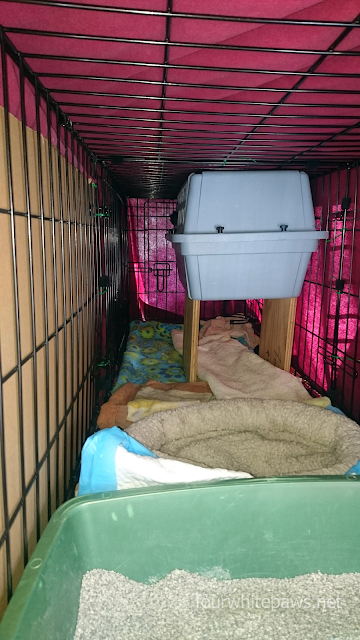 I later added a curtain to provide more security, hoping they could get the security without needing to hide in the litter box. It seems to have worked, they go behind the curtain to feel safe and come out to visit when they want. 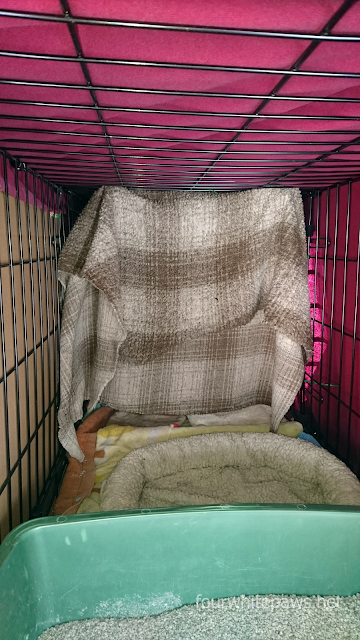 The view from the backside of Rose, Theo, and Nahum's cage, which is similar to the other, only the front cage is rotated 90 degrees. I set up the cages thinking of how my friend Nancy, from the Community Cat Coalition, taught me how to setup relocation cages, wanting the cats to be as comfortable as possible in a stressful time. 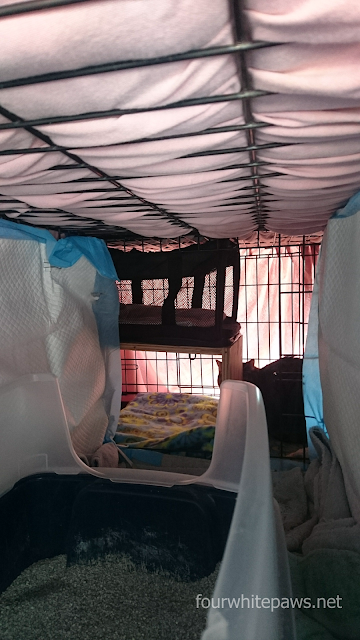 In Denver, our friends gave us our own bedroom for the two nights we stayed with them. The cats did great, even though they got bored and started getting into things.

Later, Theo explored the closet in our room and somehow got up on the high shelf. He looked so proud of himself. 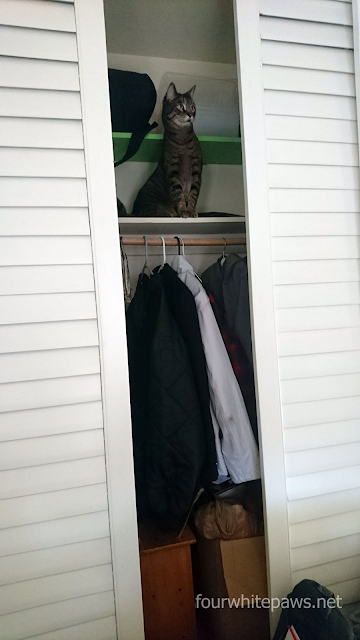 Theo ready to explore some more. 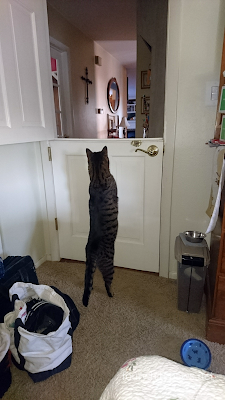 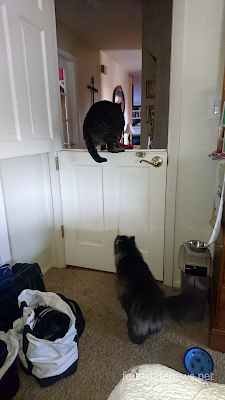 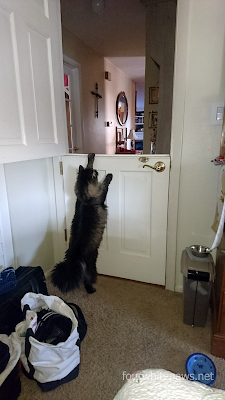 In our home, Marvin rejects all soft, comfy spots, but in our friend's house, he kept choosing the softest cushy spots! Such a weird cat! 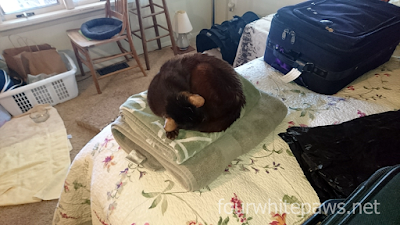 We spent a second night in a hotel, this time in Kansas. Once again, we brought in Theo, Nahum, and Marvin. This time they were much less fearful and more curious, checking it out quickly. One of the huge unexpected blessings of this trip is getting to integrate Marvin in with Nahum and Theo. Back at home, we tried and Marvin was so dominate, it never worked. Whenever the cats entered Marvin's space he would get vicious and attack them and he would follow up with spraying on his things. In a hotel room, it's all neutral space and they have been doing great! This gives me lots of hope that when we settle into our new apartment, Marvin will get to be integrated into the general population which will make our lives so much easier. 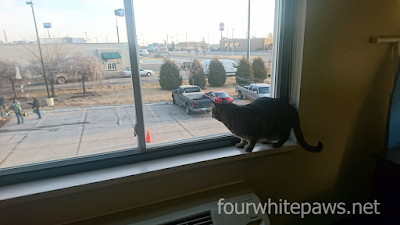 Marvin has spent most of the trip on one of our laps. I love having a lap kitty for the journey! 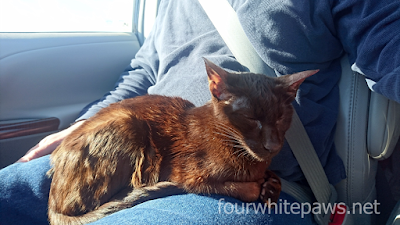 Oliver has enjoyed some lap time as well, which has been lovely. I had so much fear about how he would do with the journey and he's been so gracious, patient, and understanding. I so adore that boy. 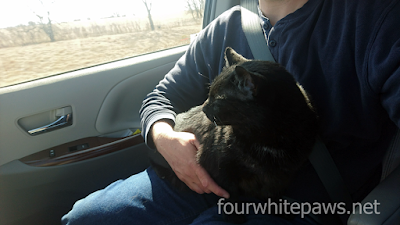 I've also been very pleasantly surprised by how Pierre is doing. He comes out when we are driving and hangs out in the front corner of his cage that is closest to us. He'll even snooze in this place, which really surprises me. He's trusting us more and more.

I never tire of seeing Marvin soaking up the loves and sun. This cat is so super chill with riding in the car, makes us think that he's done this before. He's generally pretty unsteady on his feet, so I feared how he would do with a car in motion, but he's done spectacular. He somehow seems more steady in the moving car than at the house. 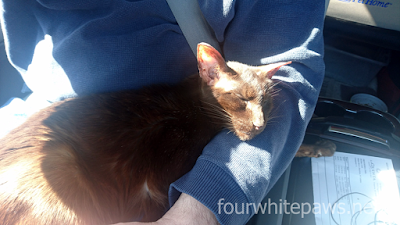 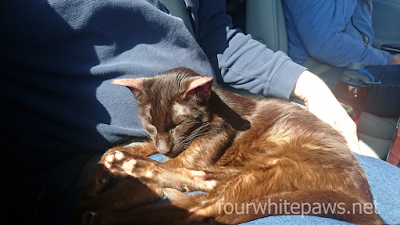