We stayed Tuesday night at a friend's house in St. Louis. One of them is highly allergic to cats, so the kitties had to spend the night in the minivan, which was parked in their garage. I left Marvin free to roam the car. He enjoyed exploring all of it, somehow making his way all over. In the morning, I found him curled up on the driver's seat, fast asleep. I did my morning routine - emptying the litter boxes and feeding breakfast, after I left the rear hatch open for packing. When I came back in a few minutes to pack some stuff, I didn't see Marvin in the front, I figured he was exploring the minivan again. When I turned to go back into the house, there he was sauntering around the garage exploring it! He was so chill. Apparently he made his way to the back and out. I'm glad I saw him, yikes! 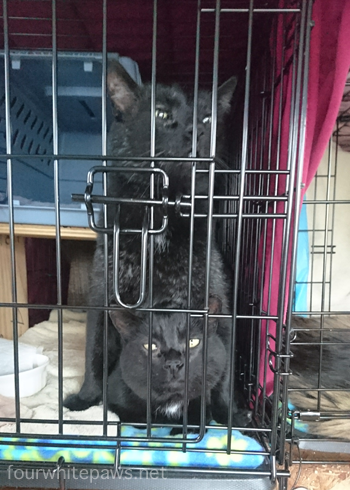 Oliver and Pierre being silly as we motor along.

We stopped near Indianapolis to visit my 89 year old aunt. She took us to a local tavern that she frequents for a delicious dinner. It's been so lovely to visit dear friends and family along the way. It seems they all live close to I-70, which is quite handy!

Wednesday night, we are back in a hotel, this time near Columbus, Ohio. 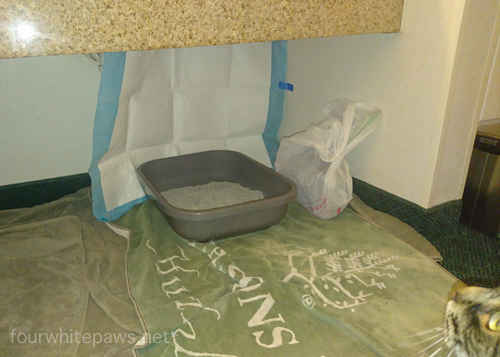 We tape up a pee pad behind the litter box because Nahum sometimes gets elevator butt when he's peeing. He's so easily distracted, I think he just starts thinking about something else and next thing you know he's peeing on the wall. At home Theo sprays in the litter box, he's not done it in the hotel yet, but we would rather be safe than sorry. The towels are for their tracking litter. The other hotels we stayed in had a hard floor under the litter box so we could just sweep up the litter, but this one has carpet, so the towels will make clean up easier. 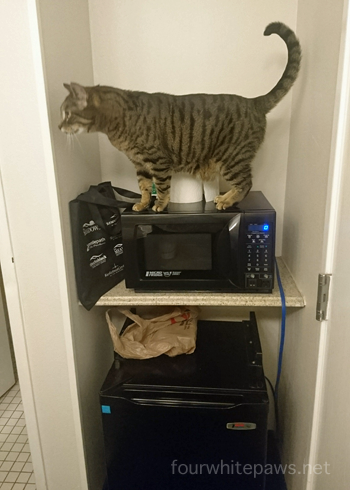 It's been lovely to see the cats explore the hotel rooms. They take right to mapping it all out on the floor and then move to the vertical exploring.

On the voyage today Nahum started sneezing quite frequently. Sneezing fits where he sneezes five or six times in a row. I'm guessing the stress is bringing up upper respiratory issues. In the hotel tonight he's only sneezed a few times. We might need stop at a vet on the way, for now we'll keep an eye on him. 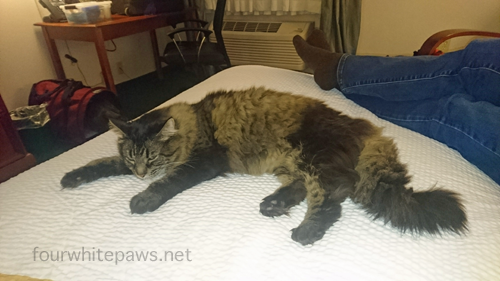 konked out on the bed

The forecast for late Thursday into Friday is not looking so good. Lots of rain that will turn to snow late on Thursday night. So, we'll get as far as we can before it turns ugly and then call it a night. Hopefully we'll get into our new home sometime on Saturday. Meanwhile, we've been scouting for a storage unit in our desired area that has space for ABF to park their 28' trailer for us to unload. So far, we've not had much luck, which is causing some stress. I found one place that has a big enough parking lot, but no available storage units. And then there are places with units that don't have places to park such a large trailer. How are we suppose to unload our stuff if there is no place to park it?! I called the local ABF terminal in Vermont to see if they had any suggestions and the guy who answered the phone happened to be a very good friend from when we lived in Vermont before! Such a small world! It was fun to catch up and it helped ease the stress about figuring out the storage place dilemma. Hopefully we figure something out tomorrow so ABF will know where to deliver our stuff.