Before Rose came along, Nahum enjoyed uninterrupted nightly feather toy play. But now, Rose thinks the feather toy belongs to her. She butts right in and steals the toy and poor Nahum just sits back and lets her have it.

For me, this is one of the challenges with having so many cats. It is hard to meet all of their needs. Just meeting Nahum's play need nightly is a challenge, but now to satisfy both Nahum and Rose takes a lot of time!

Since Rose takes over, I have had to be creative to get solo Nahum play time. A few times I have locked her on the front porch with Theo, but she can watch Nahum play and she looks heart broken that she is being left out. The look she gives makes me feel guilty, but seeing Nahum really wanting to play but not getting to, also makes me feel terrible.

So, I have taken to locking Nahum and I in the bedroom and playing feather on the bed. He loves his feather time!

The disadvantage of this approach is he has less running space and he doesn't have anywhere to parade around his feather toy once he captures it. When playing downstairs, he loves to drag the toy out into the kitchen and place it in a special place (in a box, by the shoes or by the food dishes).

Rose has taken to sitting outside the bedroom door and reaching her paws under the door as far as she can. Seeing her do that also makes me feel guilty. But I really like giving Nahum the play he so loves and needs. 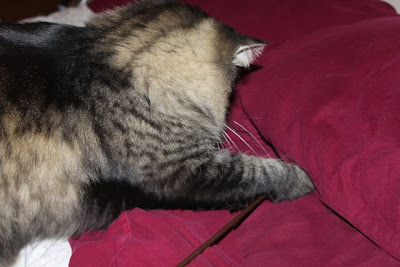 He loves diving under pillows! 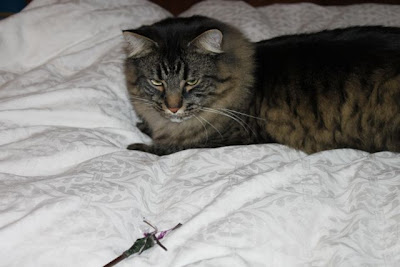 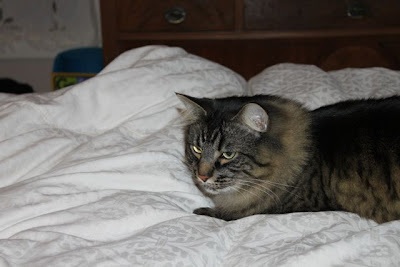 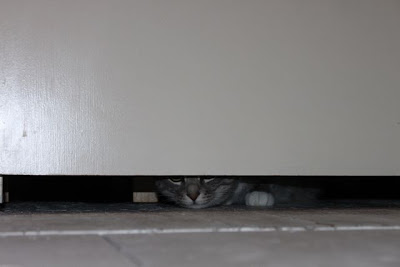 This time it is Willow peaking under the door!