Finding amazing cat toys can be a real challenge. There are lots of cheap toys out there that are so cheaply made they break quickly or the cats lose interest after only a few minutes. I am always looking out for quality cat toys and I found a winner with Neko Flies. 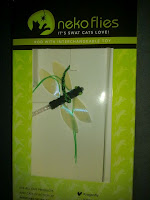 Back in Sept 2010, I bought the Kragonfly with wand for around $20. I don't usually spend that much on toys, so the test was on to see if the Kragonfly would prove to be worth that much money.

The first thing I noticed was the quality of materials. These toys are very well made. Even the wand feels sturdy and well made, it has a comfortable handle and the end where the toy connects to the wand swivels - this is a major plus as it virtually eliminates the string getting all twisted up when in play. The bug part is very real looking, I was quite impressed.

But I didn't get the toy to impress me, the true test would be if it would impress the cats. I actually bought it for Willow. She loves hunting bugs in the summer, but there are no bugs for her to hunt in the winter. I was hoping the Kragonfly would keep her hunting skills fresh all winter long. Seemed like a good idea at the time, sadly it would not work out as I had hoped. 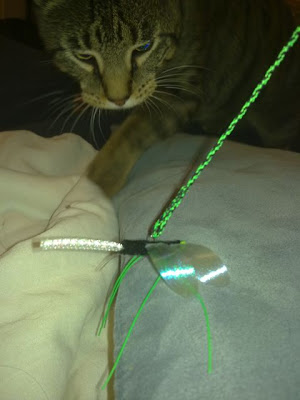 The Kragonfly, fresh out of the box. The string is sturdy. Notice the workmanship of the toy, in particular the various materials used. The sparkly wings and dangling legs are both very realistic looking.
How did the cats respond to the Kragonfly? They loved it! Theo in particular, went absolutely crazy over the Kragonfly, which was completely new for him, he never got that excited about any other interactive toy. Willow hardly ever got a chance to play with it because Theo dominated the time. Eventually, the Kragonfly became known simply as the "bug toy". 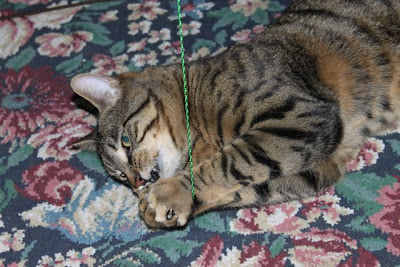 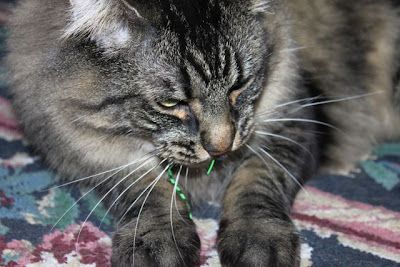 Whenever Nahum catches the bug toy, he wants to run away with it to a safe place and chew it up. 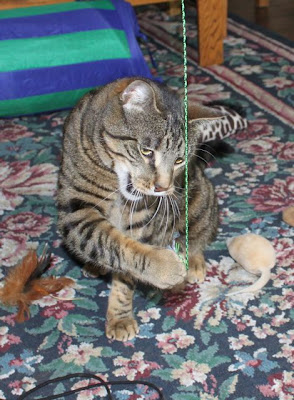 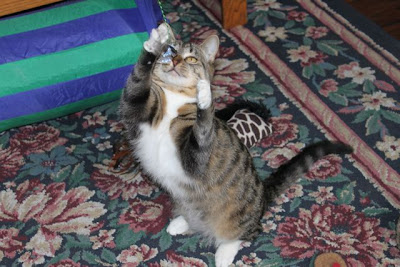 Rose is showing she loves the bug toy too. 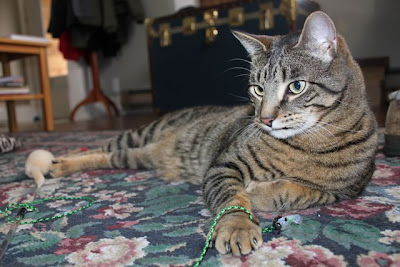 This is a rare sight. A tuckered out Theo. The Kragonfly is the only toy I have found that can tire out Theo! He usually has boundless energy. 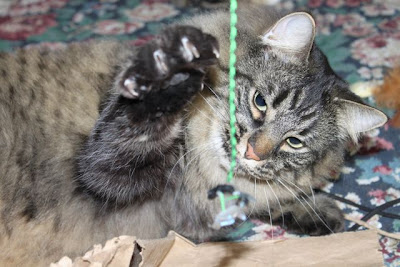 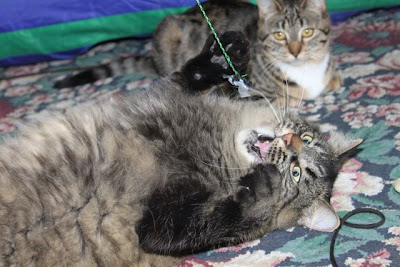 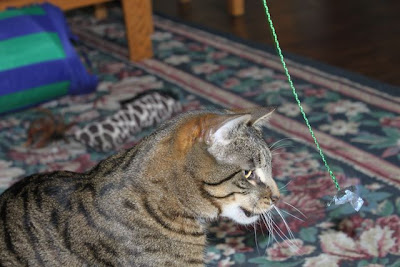 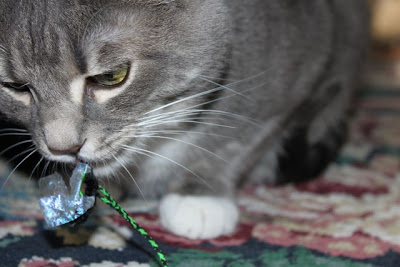 After all the other cats are tuckered out, Willow finally gets a turn! 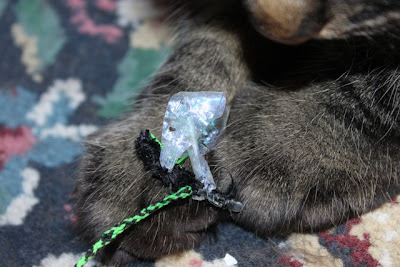 Here it is 6 months later and the Kragonfly looks battered. I think it has lost a few wings and all of its legs. Even though it only looks vaguely like it's former self, the cat's still love it!
I have found the Neko Flies Kragonfly to be the best interactive cat toy I have found. I base this conclusion on both how the cats love this toy above all the others and the quality of materials. Any cat toy that is loved well will take a beating and won't last forever. The sturdy construction of the Kragonfly assures it will accept a beating and won't fail early. Initially, I was uneasy about the price of the Neko Flies, but after playing with it for 6 months, it is certainly an example of 'you get what you pay for' - with Neko Flies, you get a great product that results in hours of shared kitty and human delight!
My only complaint about the Kragonfly is that it almost overstimulates the cats. As soon as they see the bug toy coming out they immediately go nuts! After awhile of playing, I have to store it away in a secure location. In the end, I am not really sure that is a drawback of the toy though!
I would compare the Neko Flies to the Cat Dancer in terms of guaranteed feline enjoyment, but if I had to choose, I would go with Neko Flies. Being a wand toy there are more possibilities for play and I always fear with the Cat Dancer it may inadvertently poke the cat in the eye. The Neko Flies seem safe, although, now that the toy is extensively used, the backbone of the Kragonfly (a small formed chunk of metal) is exposed. I worry a little about them breaking a tooth as they try to chew on it, which probably means it is time to retire the first bug toy and buy a new one!
Now that I have the wand, in the future I can buy just the replacement bugs, which will save money. With five or so different bugs to choose, there are plenty of options! The Neko Flies Kragonfly is a real winner here at the fourwhitepaws hobby cattery!
(Note: This is a completely independent review. Neko Flies has not influenced this review in any way. Neko Flies is not a sponsor of and is in no way affiliated with fourwhitepaws.)