Often when I look outside, this is what I see: 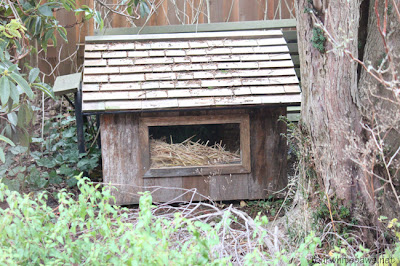 Do you see him? BK is hanging out in his house looking at me. Here's a closer shot: 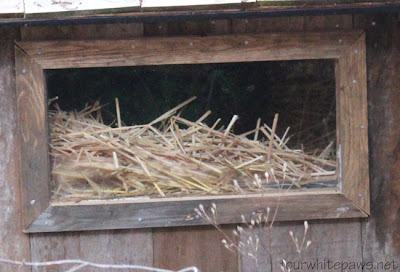 He just hangs out in there, looking really bored. I've been trying to play with him more, but I don't have as much time as I would like for him. And the more time I spend with him the more the inside kitties don't get their time. I so wish he could come inside and integrate in the family.

I have been thinking through how I might start to introduce BK to the inside cats. I was thinking of starting with Nahum or Theo first. If I get the right chance, I may try that out soon. I don't know how to get Buddy to like BK, but I suppose I can cross that bridge when it comes. The few times I have held BK up to look into the kitchen from the back door, he seems really interested.

Mama Kitty has been coming around a little more. I see her sometimes in the early evenings when she comes to get some food. She is very fearful, even the light of the flashlight sends her running. I've got a long way to go to gain her trust enough to be able to touch her. Still no sign of the kittens.

I want to try to follow Mama Kitty sometime when she leaves the house to try to find out where she goes. I've thought of getting a GPS collar (like the Tagg Pet Tracker) to track BK's whereabouts hoping he might lead me to Mama Kitty and the kittens. I tried a regular breakaway collar on BK the other day and he wanted nothing to do with that. So, getting a more bulky GPS collar on him is not gonna work!

As Greg_1948 pointed out awhile ago, BK needs a real name. As I visit with him I work through possibilities, hopefully he'll soon tell me his name. Every time I pickup BK I notice how solid he feels. He's like a solid chunk of a cat. He's not squishy fat, just solid. His solidity and broad stature brings the name "Tank" to mind. But I'll let you know when he officially has his name. BK also needs his own page on the blog - I'm working on that too!
Posted by The Cat Guy at 9:30 AM