Hershey got the day off from the Home for the Holidays adoption event on Sunday. When I got there Sunday morning to get him ready for the day, I learned that he had an overnight litter box accident.

When Hershey uses the litter box he balances all four paws on the rim of the box and does his business. For whatever reason he insists that no paws touch the litter while he's going! It's quite the balancing act, but he always manages it without problem. At the adoption event they use the Worlds Best Cat Litter which is a lot lighter than the clay litter we use at home, and they only use a small amount in each box. So, after everyone left for the night and it was safe, he went to use the box. When he balanced up on the edge he sent all the litter and soft poop sailing all throughout his cage. Poor guy, I feel bad that he had to sleep in that mess.

The event organizer kindly cleaned up his cage in the morning, but poor Hershey had poop caked all in his long fur. Figuring that people might not want to adopt a poopy smelling cat, we took him home for a bath. After the bath he still had an undesirable odor, so he got a second bath to get whatever we had missed in the first round. He wasn't very happy about that.

After cleaning Hershey up, we decided to give him the day off so he could rest and fully dry - he very much appreciated that! I went back and hung out at the event for a few more hours. After thoroughly cleaning Hershey's cage, I set it up with the digital picture frame of him and a sign saying "I'm still available for adoption, I'm just home resting today." 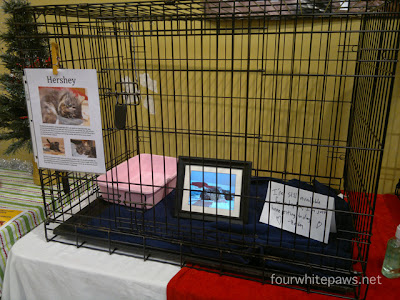 Meanwhile,  I got to hang out with some awesome cat people and meet more wonderful cats! 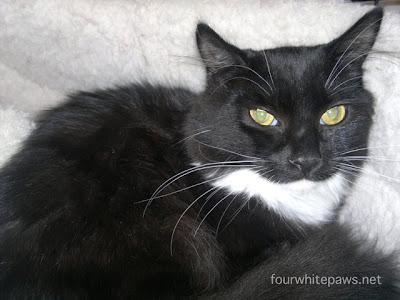 This was a formerly feral kitten who is being tamed. He looks like a mini-Max! 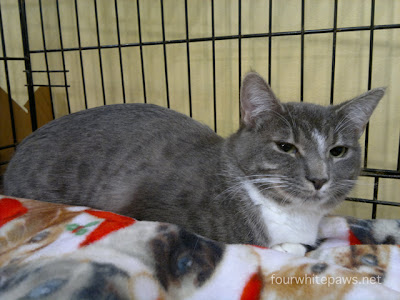 Olive, a shy girl, reminds me of Willow!

I got to hold Olive for quite sometime! She loves being held, which is lovely! 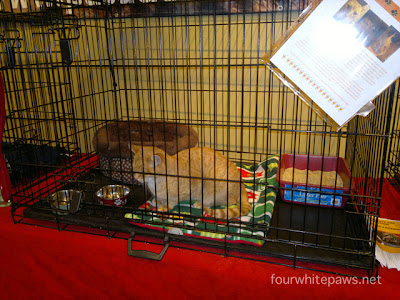 When Fanta arrived at the event for his first weekend, he was so scared, he immediately tried to disappear in his bed and was shaking like crazy. Now, near the end of his second weekend he's all confident and working his cage like a pro, luring prospective adopters to give him a look!

The Home for the Holidays event is a big fundraiser for the Community Cat Coalition as well as lots of other great animal rescue groups. One of the many items available for a donation is a private label wine, known as the Christmas Cat Cab. Tiny Tim is on the label, he was a tiny runt kitten who was rescued and lovingly nursed to health by a CCC volunteer. There were many times when his health was touch and go, but it now appears he will make it and he goes to his new forever home next weekend! 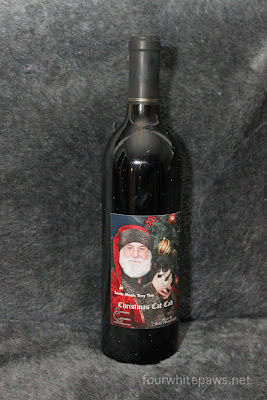 Here's a closeup of the label: 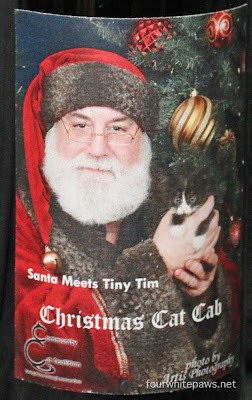 The photo on the label was done by Artis Photography, the official Home for the Holidays photographer who has been taking the santa photos. They're donating the proceeds from all the santa photos to various rescue groups. On Saturday, they took over 50 santa photos with pets! They typically do about 30 a day. Santa was looking rather tired at the end of the day, he said he his cheeks hurt from all the smiling!

So, Hershey will return next weekend for one more shot of finding a forever home before Christmas. In the mean time, he'll get lots of plays and loves. It's great to snuggle him as he smells as clean and fresh!
I recently learned of a new cat-blogger who has decided to step into the world of TNR. She lives in Florida and has been documenting her TNR adventure on her blog, My Feral Family. If anyone is near her and knows resources that might be helpful for her, please her know. She is in need of borrowing a drop trap.