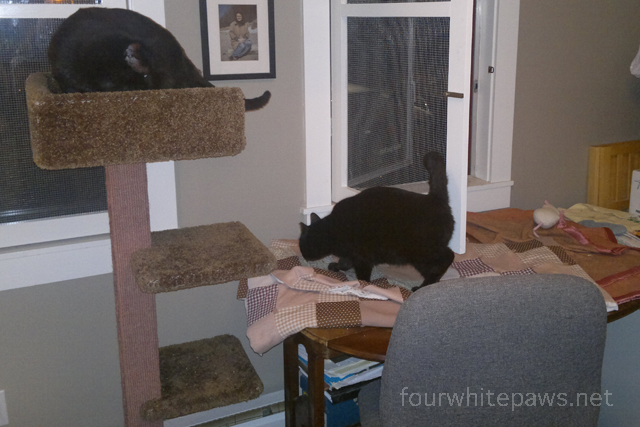 For the second night in a row, MK popped right in with Oliver. I think he would follow his papa anywhere. He lets me get within about 4-5 feet before he gets scared and heads for the window. This means that I'm not able to close the window with him in the room, which creates a problem.

The reason I bring Oliver in for the night is to keep him safe. Since he's been spending the nights inside he hasn't been in any kitty fights with the other neighborhood cats. So, for this to work, he needs to have restrictive access to outside after bedtime. In the morning I let him back out, although I think he would be happy being a purely inside cat - one reason I let him back out is because MK and Pierre adore him. (The other big reason being Buddy and Theo's dislike of him.) 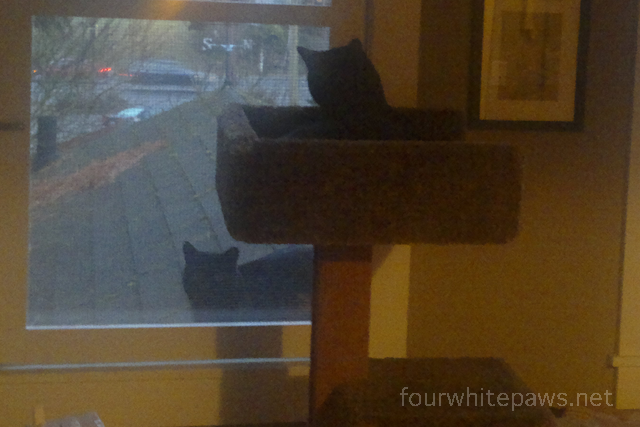 Pierre, this morning, looking into Oliver's room while Theo watches from above

Last night, while MK was inside it came time to close and window for the night. As expected, MK darted out, he wasn't going to let me get between him and his egress. As soon as the window closed, he was right there looking in with a curious and sad look on his face. He wanted to be in with his Oliver. Seeing him confused and pawing at the window broke my heart. I would love to have MK and Pierre inside at night too, but how do I allow them access but then not back out until morning?

Having two semi-feral cats inside would create some challenges too. I routine treat Oliver for fleas, but how could I do that with MK and Pierre when they won't let me near them? Although when they are more contained inside a room, maybe I would have more opportunities to work at taming them.

I did a little research and found this - the Microchip Pet Door by SureFlap. 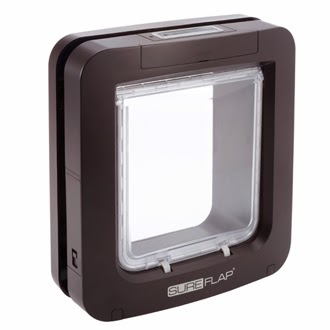 It reads a cat's microchip to determine if the cat can have entry or not. And it has what they call "curfew mode" which means you can program the curfew time when cats can only enter the home but not leave. I believe this would accomplish exactly what I'm looking to do. Oliver and his family could come inside at night whenever they wanted but then could not leave until whatever morning time I allowed.

It's memory can remember up to 32 different microchips - thats a lot of cats! Imagine the all night parties Oliver could throw for his friends!

There are a few hurdles that would need to be navigated before being able to use something like this.

MK and Pierre would need to be microchipped. I wish I had done that when I originally TNR'ed them, but back then I didn't know how attached I would get!  I've been wanting to re-trap them anyway so I can get their vaccines updated, so I could microchip them at that time.

A few other logistics pose significant challenges. How would I install such a pet door? The windows are aluminum double pane casement windows. This would not be an easy task and would require some engineering. I'm not so sure about installing it into the wall of the house, that seems rather permanent.

Sure Flap doesn't give their products away, so, I will need to be saving my pennies as these pet doors are expensive ($200).
Posted by The Cat Guy at 11:32 AM