It was this day, five years ago that I rescued her from the engine compartment of a truck parked in front of my house. She was about 8-weeks old at the time. This was before I knew anything about cat rescue, so our plan was to take her to the animal shelter in hopes they would find her a good home, but then this happened:

Once Laura held her, it was all over. Rose was here to stay! It's a good thing too, because just a few days later, our local shelter had an outbreak of the highly contagious feline panleukopenia virus and in an attempt to stop the spread of the deadly disease, they decided to euthanize all 81 of the shelter cats. I'm very grateful Rose didn't get caught up in that mess.

Back then, Rose was not so afraid of humans.

Rose has always had a thing for being cuddled up with fluffy Nahum.


For us humans, this 5th year anniversary of Rose's Gotcha Day is a day of celebration. However, I imagine if she were telling the story it would lack the celebratory feeling.


It's been five long years now, since I was first imprisoned by these evil humans. At first they played with me and loved on me, said something about rescuing me and giving me a good life, but then they turned on me and it was terribles. I trusted them, I'll never make that mistake again.

They took me next door and locked me in a small cage for a week all alone. Then sometime later, they dragged me back over there and the lady in the white coat sliced my belly open. They said something about a string that I ate and all of this was for my own good, but I know better - those humans were just sizing up my innards in order to know how best to cook me. Then came the cramming of nasty little objects down my throat, which again they said was for my good, but I know it's lies, cuz I never see any of the other inmates get treated this way. Not long after the trauma from that horrible ordeal had finally settled, they once again forced me back into the prisoner torture unit and brought me back to that awful torture-place and this time the evil humans took away my girl-parts. It was so humiliating.

And if all that weren't bad enough, every year they celebrate that awful experience by forcefully dragging me back to that awful place so the lady in the white coat can have another go at me. Indignity! Horror! Humans!! I've learned my lesson, every day I'm on guard, because I know they are always lookin to snatch me and torture me further. I just know they eat cute little cats like me. It's all I can do to keep a wide distance... 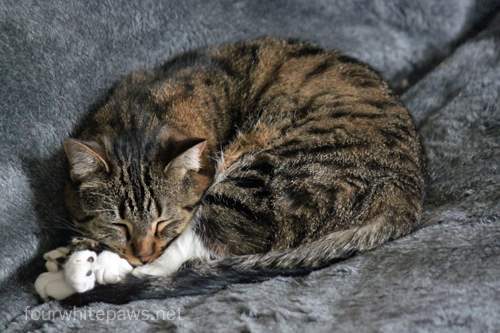