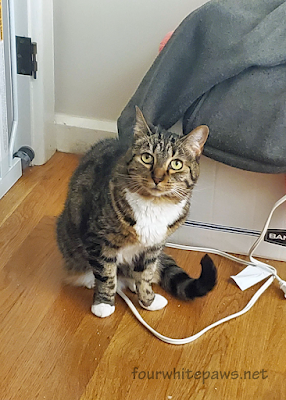 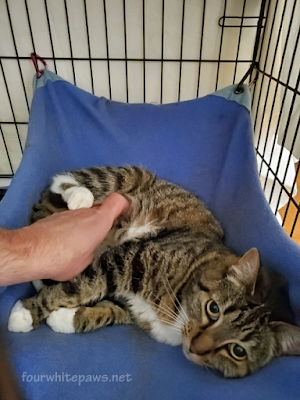 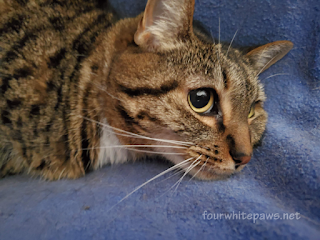 She purred and purred as she enjoyed tummy rubs and check scratches! Whenever the hand stopped moving, she insisted on more!! 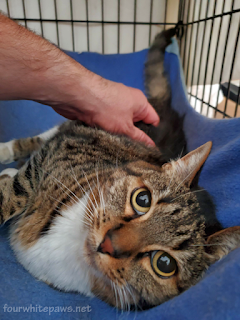 In getting her wound taken care of, the vet ran some blood work and found that her calcium level was abnormally high. Over the next many months she got more tests and we tried a medication to help with the calcium, but it didn't really work. So, a few more ultrasounds. The first one revealed weird things on her liver and other organs. The last one was of her parathyroid glands and it revealed a growth on her right parathyroid gland.
Yesterday was her surgery, removal of the right parathyroid gland. The parathyroid was only 3mm, which seems small! The surgeon noted after the surgery that he wasn't able to separate the parathyroid and the thyroid as originally hoped, so she had right side thyroid and parathyroid removed.
She is recovering at the hospital for most of this week so they can keep close eye on her calcium levels. The goal is for it to go down to normal range and for the other three parathyroid glands to compensate for the missing one. Not sure how having the one thyroid gland may complicate things - a question for the internal medicine specialist. 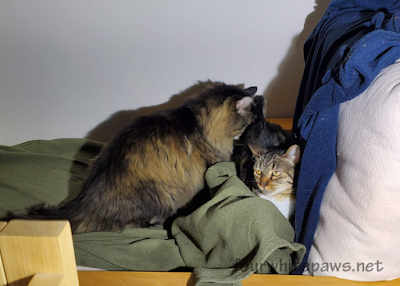 Nahum and Rose - BFF!!
After she heals from this surgery and the calcium level evens out, then we start looking at what's going on in the abdomen. She had been scheduled for exploratory surgery, with the vet thinking maybe she had cancer on the liver. I hope that's not the case, and now hoping it's something related to having had high calcium for a bit and that with normal calcium levels, everything goes back to being good.
Purrs and prayers for a speedy recovery for Ms. Rose would be appreciated!
Posted by The Cat Guy at 8:50 PM