The cats have been using our little sofa as their favorite scratching spot. Even though I bought them a state of the art, super-expensive, hand-made scratching post they prefer to scratch up the corners of the sofa.

I have read about several ways to curb the cat's desire to scratch furniture. One way to do so, is to use double sided sticky tape on the places where they scratch. The idea is that cats don't like the feel of the sticky on their paws, so after a few attempts at scratching, the negative experience will make them find a new spot. That sounds simple enough.

So, Saturday at the cat-store, I found a package of Sticky Paws, the package claims "Stop cats from destroying furniture!" That is what I was looking for, so, $15 later, my furniture's salvation rests in the hopes of Sticky Paws.

I followed the directions and applied three strips along the edges of the sofa that get scratched the most.  Initially, the cats paid no attention even though they watched as I affixed them.

The next morning, as I was siting on the couch finishing up a blog post, Nahum approached, sniffed a Sticky Paws adhesive strip and immediately started pulling it off with his teeth. He somehow knew not to use his paws and so used his teeth. 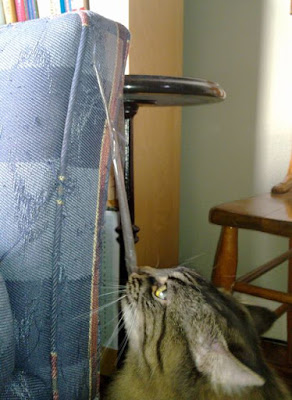 "Who stuck this sticky stuff on my favorite scratching spot? I fix it."
Willow assisted in the removal. A few minutes later, they were working on the second strip. 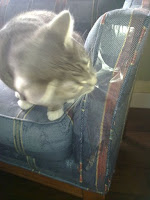 Instead of getting a scratch deterrent, I gained a new source of entertainment!
Posted by The Cat Guy at 4:21 PM