Theo routinely patrols his space for unattended nuggets. I recently collected some photographic evidence of his handywork.

An unusual sound of clanking bowls drew my attention to the kitchen. There I found Nahum looking oddly innocent. Interestingly, there were no bowls around that could clank. Moments later, I heard the sound again - it was coming from inside the cupboard. 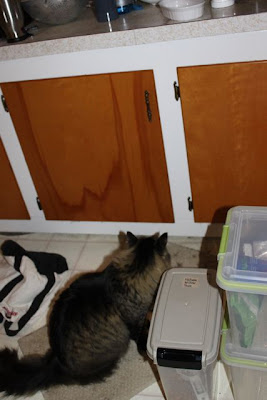 Nahum serving as lookout while Theo does the deed. 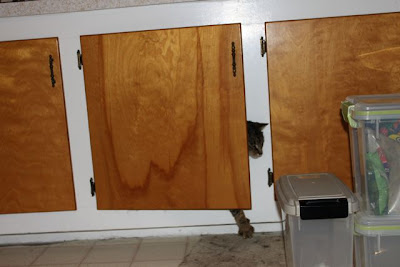 Moments later, Theo emerges after ransacking the cupboards in pursuit of stray nuggets. 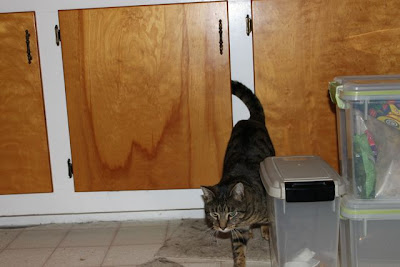 Theo, feeling pretty good about himself and not at all concerned about being caught in the act.

Operation Sniff and Snarf:
Minutes after Operation Hideaway went down, I had settled back into my work in the living room when odd sounds emanating from the kitchen again attracted my attention. 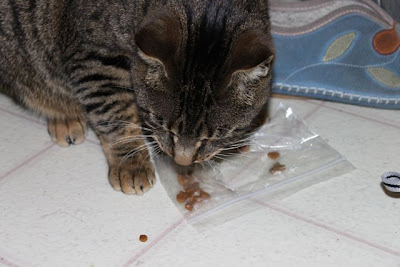 Upon investigating the strange sounds I found Theo shredding a ziploc bag and snarfing down nuggets as fast as his jaw muscles would allow. He had successfully sniffed out a bag of nuggets that I had forgotten to remove from the small pocket of a canvas bag. (The canvas bag can be seen in the first picture, to the left of Nahum.)

Theo's nose for food is astonishing. Even while feeling under the weather and congested, Theo was able to sniff out a sealed plastic bag of nuggets hidden away in a small pocket of a bag.

His amazing ability got me thinking. Dogs are used to sniff out all sorts of things; bombs, narcotics and perishable contraband, but why not cats? Maybe Theo's sniffing talent could be harnessed and used for good! A police-cat could have all sorts of advantages over a dog; cats can move without making any sounds, their amazing agility gives them more options for sneaking up on the bad guys, they do very well seeing with little light and they can jump incredible heights. I think I might be on to something...