Back on July 20, I posted about the danger of Kirkland Signature Flea and Tick Control for Cats. Back then there were 26 reviews on Amazon.com with 24 of them being negative. Today there are 66 reviews with 61 of them being negative. There are many comments detailing how people's cats were harmed or killed after using this product. Yesterday's comment was heartbreaking, someone's beloved 5 year old cat died a few days after using this product. 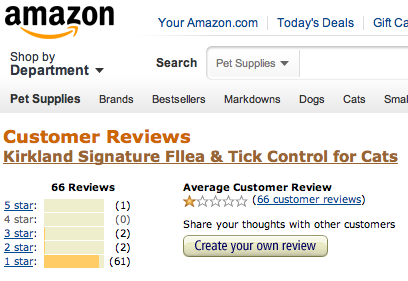 It's been almost two and a half months now since I posted that first post here. I was amazed to see how quickly the pageviews for that post grew. People are searching for information on KS Flea and Tick Control and they are finding my blog. In only a matter of weeks, the pageviews became the all time most visited page on my blog. Today, that post has racked up more than three times as many views as the second most viewed post. 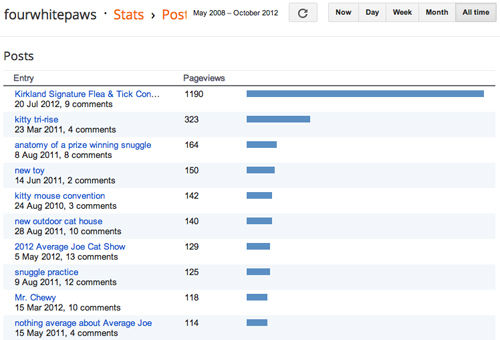 The popularity of that post both makes me happy and sad. I hope more than anything that people are researching this product before they use it and thus gain knowledge to make an informed choice about whether or not to risk using Kirkland Signature Flea and Tick Control for Cats.

After seeing how quickly the pageviews were adding up, in late July I started an advocacy website, CostcoFelineVictims.org to further spread the word about the dangers of Kirkland Signature Flea and Tick Control for Cats. The idea of the site was to collect the horror stories from people who have used this product, so when people searched for online reviews they would find this information at the top of their search results. The second purpose was to be a clearinghouse of information for a possible future class action lawsuit against Costco.

Back in early September I called Costco to share my concerns. The customer service person was polite but naive. He insisted that Costco would never sell a product that would be dangerous to customer's cats. I suggested he read the online reviews of the product and he said they were not able to do that. He would not let me talk directly with the Kirkland Signature buyers, so I got the address for them so I could mail them printouts of the Amazon.com reviews. Sadly, other things got in the way before I could get that packet of papers in the mail.

If you recall, I bought this product back in late July, because I trusted the Costco brand and I thought it was a good deal. Thankfully, I read the reviews before subjecting my cats to this dangerous product. This past weekend, I finally got around to returning the KS Flea and Tick Control for Cats product to my local Costco store. I asked the clerk if they were still selling this product and he said they had pulled it several weeks ago. I asked if it was only this store or all the stores that had stopped selling it and he said he wasn't sure but he thought all the stores.

I just called Costco Corporate to find out if they have really stopped selling it company wide. The friendly associate told me he thought they had pulled the product for a time and reformulated it with something less potent because they had heard that some cats were sensitive to the product. He told me there were 480 units of the product available now at my local Costco store. Ugh.

Please keep spreading the word that people should read the reviews before they use this dangerous product. If you are a blogger, please consider doing a post on this topic to continue to spread the word. Innocent cats are dying and suffering by the hands of care givers who are just looking to save some money.
Posted by The Cat Guy at 11:22 AM

Email ThisBlogThis!Share to TwitterShare to FacebookShare to Pinterest
Labels: Review