A Cat In Paris

A Cat In Paris is a short animated film that reveals Dino's double life. By day, Dino lives with Zoe, a little girl who has lost her voice after the recent violent death of her father. By night, Dino wanders out into the city and visits Nico, a slinky cat burglar. Together they pull off many jewelry thefts around Paris. All is well until Zoe decides to follow Dino one night and before you know it Dino's two worlds start to come together.

I really enjoyed this film! It is beautifully created and very cat-centric. I love all the fish pictures and rugs in people's homes! Dino is a sweet, complex kitty, who reminded me a lot of Oliver! And now I wonder what Oliver gets up to when he's out and about.

One thing I noticed throughout this film is that I was tense as I watched it, maybe because I wasn't sure where they would go with the story. Thankfully, the ending it good and happy. The only critter that dies is the poor lizard that Dino hunts early in the film. 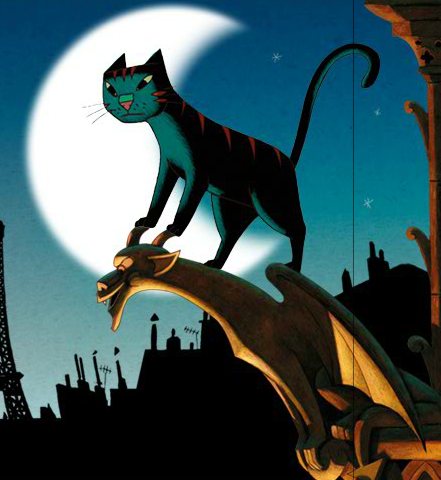 You can watch a trailer of the film at CatInParis.com or if you subscribe to Amazon Prime, you can watch A Cat in Paris free online with your Amazon Prime account. Let me know what you think!
Posted by The Cat Guy at 10:20 AM