I realized the other day, when I was telling a friend the story of how I came to know Theo, that I haven't included his story on my blog. So, today I rectify that omission.

I first met Theo on Tuesday, December 29th, 2009 in frigid weather in the middle of rural Indiana. Theo showed up on the doorstep of my in-laws as we enjoyed a family holiday gathering. The temperature was extremely cold outside, highs in the mid teens and lows in the single digits and there was several inches of snow on the ground. Theo desperately wanted food and warmth.

It is pretty common for neighborhood cats to roam and I had seen several wandering around. The house across the street had several cats that freely roamed. So, assuming he was a neighbor's cat over for a visit, I watched him through the window for a time as I had watched the others. His behavior was different than the other cats though, he desperately wanted to come inside.

My mother-in-law indicated he had been hanging around for several weeks and she believed he was an abandoned or lost inside-cat.

Laura went out and picked him up, he snuggled in, purring and kneading his front paws as he soaked in the love and warmth. His claws were quite long and he was looking rather than thin. Otherwise he appeared to be in good shape. 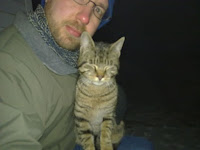 I bought him some food from a nearby store, and he gobbled it up. He followed me anywhere I went. That evening, I sat on the front step in the frigid cold and held him. He was doing his best to merge with me as he sat in my lap, purring, kneading his front paws and meowing passionately. My heart was torn up as I frantically tried to figure out how best to care for his short term needs and long term well-being in an rural area with little to no animal rescue resources. 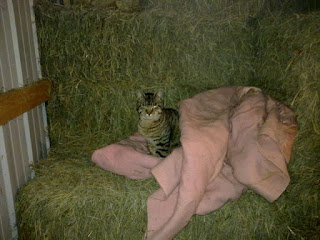 I asked my father-in-law if there were any warmer places he could sleep. He suggested the three sided sheep barn. I went over and checked it out, with Theo following by my heals. Inside the barn, there were some bales of hay stacked near the sheep enclosure. I found an old pink soft blanket nearby and created a cozy kitty spot on the stack of hay bales. I placed Theo up in the blanket and he settled right in. I brought him some food and water, which quickly froze. Before going in for the night, I placed my fleece jacket on the front step by the door, in case he decided to camp out there. 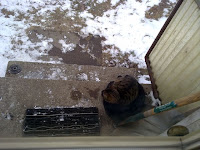 That night started one of many conversations with Laura regarding possible options for Theo. Take him home with us? Find a local shelter to bring up to? Could he go home with a sibling? The idea of leaving him to continue being cold, hungry and lonely was not sitting well with me. 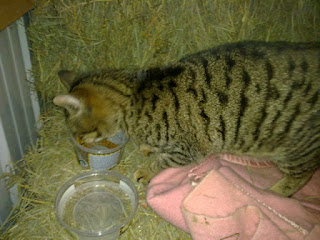 The next morning, I wondered if he would be long gone. I put on my winter gear and went out to the sheep barn. There was Theo, exactly as I had left him the night before, in the blanket. He greeted me with a big stretch, some enthusiastic meows and lots of purrs.

Theo played in the snow with the nieces and nephews and seemed to have a great time. It was clear he loved playing with people and kids. Even the rough-playing style of the kids didn't phase him in the slightest. At one point one of the kids ran across the field toward the house and Theo bounded after him - he was lightening fast as he flew across the snowy field with his tail sticking straight up in the air! Seeing his easy-going nature with the kids, his adventurous attitude, and his delight in being with people, I wondered if he might be a good candidate for a therapy cat.

Finding Theo a home would require acting fast, as we were flying home early the next day. That left me with the day to figure out Theo's fate. I called around to local shelters and learned that the local county had done away with their animal control services long ago to save money. Other local shelters only took animals from their immediate area. I eventually found a shelter that would take him for a fee, but then I agonized over the thought of such a delightful cat being put down at a kill-shelter because no one could afford to adopt him in the small window of time the shelter would give him.

The option of us taking him home remained. I know of a great no-kill cat shelter, Purrfect Pals, near our home that would guarantee him a good chance of getting his needs met. Or maybe we could keep him, although Laura was not keen on the idea of having three cats. I checked into the airline requirements to take him on the plane, he would need a health certificate from a veterinarian. 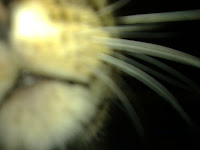 A quick call to the local vet and I had a late afternoon appointment. Not wanting to take someone's cat, I inquired with the vet if anyone had reported a missing cat and I had them scan for a microchip. Several dogs had been reported missing, but no cats and no microchip was found. An exam, a few tests, a nail trim and a rabies shot and we were good to go! They even graciously provided me with a hard plastic carrier for the flight and a small bag of cat food. Thank you kind staff of Bush Vet!

A quick trip to the cat-store to acquire some essentials for flying with a cat and we were good to go. Theo spent one more cold night out in the barn with his pink blanket and then the next morning his big adventure started. 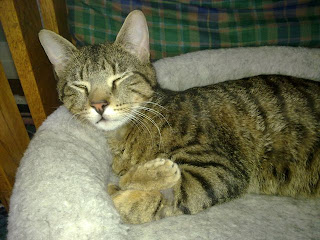 He is now fully integrated into our home and he is on track to be my first registered therapy animal! I even had the joy of having Theo asleep in my lap as I wrote this blog post. He is a delightful joy! We chose the name Theo because it means "Gift from God" and he is a lovely gift indeed.
Posted by The Cat Guy at 12:46 PM