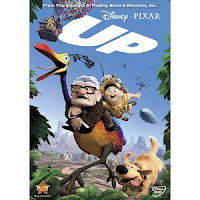 I recently watched the Disney/Pixar film Up and it got me. I haven't been gotten by a film in a number of years but this one did. Before going much further, a word of warning, there are spoilers in this blog post, if you haven't seen the movie and plan to, you might want to wait to read this until after you see the film.

In Up, Carl and his wife, Ellie, share a beautiful and playful dream throughout their life together. The film tells the story about how Carl attempts to fulfill this dream after Ellie's death as a memorial to her. After a lot of work he pulls it off and the dream is accomplished!

I hugely fear facing the death of people or pets whom I love dearly. Last May my beloved kitty Max died. In the time since his passing, I frequently get overwhelmed with tears and intense sadness when thinking about his absence. Max meant the world to me.

Some of the intensity of my heart pain may be coming from previous ungrieved loss. I haven't really gotten over Lassie's death (my first dog) from when I was an adolescent. The long lasting intense pain of that loss created an enormous fear of ever having to feel that way again. Even though I have always had a huge love for animals, most of my adult life has been free of pets.

Max was my first. He stole my heart even as I tried to keep myself somewhat safe by not getting too attached. That effort didn't last long, I was powerless against Max's amazingness. His death has created a chasm in my heart. It brings me right back to the pain associated with losing Lassie. There was a good reason I never wanted to feel that much pain again - it is too much. And yet many years later, I dared to love an animal and now the pain returns. While in the midst of the intense sadness of Max's loss, I would chastise myself for setting myself up again to hurt this way. "If only I hadn't been so foolish to go and love an animal again because when they die they leave an excruciatingly painful wound that never heals." Although, had I never known Max, I would have missed out on his delightful gift.

Max gave me a life changing gift - a taste of the abundant joy and crazy fun that is unique to cats. Prior to Max I was a hardcore dog-person, now after Max, I am fully a cat-person.

I could completely relate to Carl as he clung to the stuff and memories that connected him to his wife. I similarly cling to pictures and memories of Max. The memories, pictures and stuff makes the connection feel tangible and recent. Thus I was stunned when Carl began unloading his precious possessions. This scene represented to me the transformation that Carl made from remembering Ellie by clinging to the past memories into living out the life changing gifts Ellie had given him. I don't think that memories or things of past are bad in and of themselves, but the desperateness to which I cling to them, feeling that the thing itself is the last connection to the deceased is not true.

So, for me this means letting go of trying to get Max back and more fully living into his gift of my profound enjoyment of cats. Everytime I delight in a cat, it is a testament to Max. Letting go is hard. I so much desire the concrete, tactile touch. I don't know that my experience of this transformation will be as radical and instant as Carl's but I know I continue to move further along the journey of grieving.
Posted by The Cat Guy at 10:00 PM