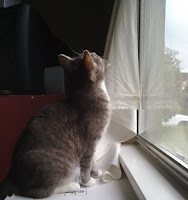 Bug season is near and Willow is thrilled! Hunting bugs is one of Willow's passions. In most activities she usually passively trails behind the other cats but when it comes to hunting bugs she pushes them right out of the way and goes all out.

As the outside temperatures begin to rise with the coming of summer, the bugs are starting to appear. An occasional bug finds it's way into the enclosed porch and becomes a tasty snack.

Last summer, Willow and I had a nightly ritual of hunting bugs together. I would knock them down lower or get them to fly and she would take them down. Then as winter approached I searched for a humane moth trap so I could live trap moths and release them for her. I never found a catch-and-release moth trap, it seems most people are more interested in killing the moths directly.

Seeing Willow's enthusiasm recently as she hunted down a huge fly, I believe it's going to be an exciting bug season!
Posted by The Cat Guy at 12:09 PM