At the cat show I recently attended I got a hot tip from Steve, the owner and handler of some Maine Coon cats. He told me about The World's Best Cat Litter, which is made from corn rather than clay like traditional litters. It is suppose to be fully compostable and last longer. I am not too concerned about either of these points, but the selling point that intrigued me was the lack of silica dust. Our current litter, Litter Purrfect, leaves a thick coat of silica dust on everything in the room. I can only imagine what the silica dust does to Willow's asthmatic lungs.

The big down side to this new litter is the huge expense. It cost more than three times as much as our old litter! 0.91 cents per pound versus 0.27 cents per pound. But, if it helps Willow breathe better and extends her life than the extra cost will be worth it.

Besides the cost, my other hesitation in switching to this litter is the fact that it is made from corn and may be a temptation for Theo to eat. He gets ravenous at times and eats whatever he can find. I don't want him chowing down on the litter, albeit it fresh or used! 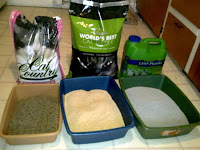 I took the plunge on the new expensive litter and have setup a preference test. We generally have two litter boxes for the cats to use, but for this test, we will have four boxes in operation. The options are: Cat Country (wheatgrass fiber pellets), The World's Best Cat Litter (ground up corn) and the Litter Purrfect (clay). 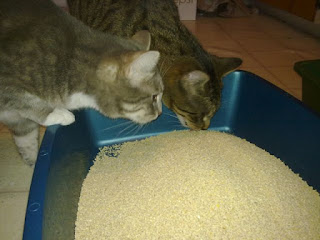 Sure enough, minutes after pouring the litter into the box, Theo started eating it! 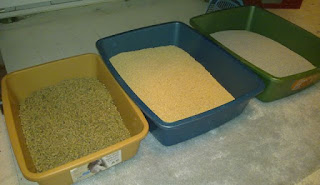 Stay tuned for the results.