Well, the litter test may need to be scrubbed.

I witnessed Nahum checking out the new litter. He scratched around in it for a few minutes, took a passing glance at the wheatgrass litter and then went with the clay litter. Later in the day, I noticed that one of them had used the new litter (yea!) but hadn't covered it up - apparently it was all they could handle just to use it! 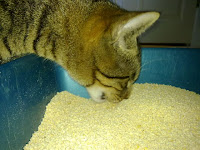 Then today, I found Theo enjoying a corn snack as he snarfed down the new corn litter like it was a special treat. I had to cover it up to get him to stop.

Having Theo eat cat litter is not an acceptable option. So, the test will be modified and re-administered. At this point, I am thinking I will need to mix in some of the used clay litter into both the wheatgrass litter and the corn litter. Maybe then, they will feel more comfortable using the new and Theo will be less likely to feast on it.
Posted by The Cat Guy at 1:11 AM