Last Tuesday evening, I glanced out the window as I was walking by expecting to see Oliver or one of his siblings having a snack at the Dining Hall. Instead I saw a very large light brown colored animal occupying the Dining Hall. I stopped, a bit startled and took a closer look. I couldn't tell if it was a cat or some other critter. It seemed odd that Oliver and The Family were parked around the yard intently watching this critter eat their food. I grabbed a flashlight which revealed the critter was indeed a large cat with siamese coloring, who I'm calling Big Siamese Kitty (BSK).

After BSK was done eating, Oliver casually escorted him out of the yard and down the alley. Two members of Oliver's Family followed a short distance behind, providing backup.

I've never seen this cat before. I don't know if he's new in town, just passing through or what his story is. I found it odd that Oliver and his siblings were scattered around the yard watching this newcomer chow in the Dining Hall. For whatever reason they didn't feel the need to interrupt his dinner before they chased him off. A few hours later, he was back having some more dinner.

A few weeks back my friend Nancy let me borrow her portable kitty-webcam system. It's a webcam connected to a laptop all rigged up together in a large weather-proof Rubbermaid container. The camera snaps a photo every 5 seconds. It's a sweet little setup. I decided this would be a good opportunity to set it up and record the comings and goings at the Dining Hall throughout the night in case BSK returned.

With everything setup, all that was needed was to wait for nightfall to see if BSK would return.

It didn't take long before I had my answer.

Once again, Oliver kindly escorted BSK from the yard. BSK didn't go far, he hung out under an ambulance, which is parked at the fire station, directly across from my yard.

Oliver approaches to have some words with BSK.

BSK flattens his ears and fixes his lasers on Oliver. 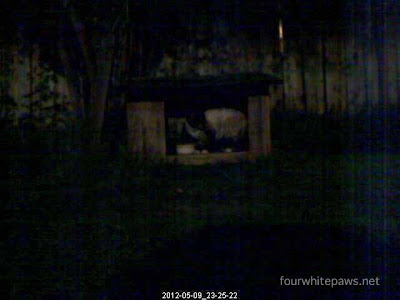 If BSK continues coming by, I'll need to decide about TNR'ing him. BSK is a big cat, but he doesn't look like he's missed too many meals, so maybe he's lost or was dumped. Or he could be one of the ferals that my neighbor a few blocks to the north feeds and cares for, I'll check with her.

I've tried to approach him, but he runs off every time. I'm thankful that thus far I haven't heard or seen any signs of fighting between him, Oliver and The Family.
Posted by The Cat Guy at 9:49 PM