More often than not I'm home before evening, however Tuesday's are the nights I get home the lastest. I usually roll into the driveway sometime before 9pm. For the last four or five Tuesdays now, Oliver has been out in the driveway waiting for me. 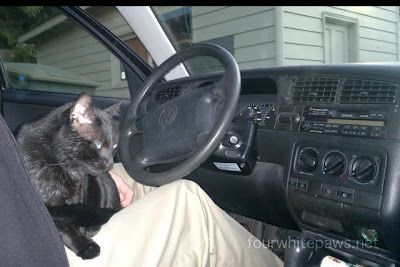 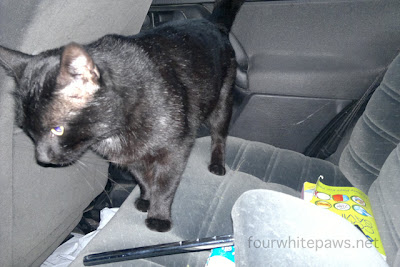 I back the car in the driveway, turn off the motor and open the door. Oliver comes right over and hops up to my lap. He head butts me and proceeds to soak up the loves. After a few minutes of loving he takes off to explore the car. I have to watch him to make sure he doesn't spray inside the car! Before exiting he parks in my lap again for another round of loves. 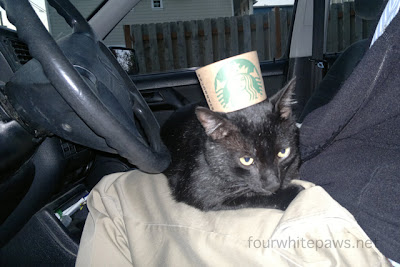 I don't know if he's waiting for me or if it's happenstance but regardless I love it!! 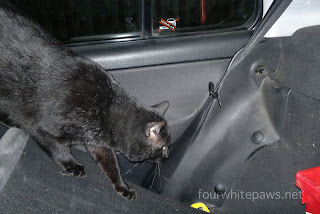 Last night after Oliver left and before I got fully out of the car, I watched Brown Kitty approach me. I had the driver's door open and my leg was on the ground outside the car. I stayed as still as I could as he came near. He sat about at the front of the car and just watched me. I talked softly to him and he just watched. It was the closest I've been to him, I was hoping maybe he might come closer but then Oliver chased him away! ARGH!!

Thinking he might come back, I locked Oliver on the back porch and went back to the car to wait. Brown Kitty didn't come back but Oliver's daughter and son came by. They walked very close to me, which has never happened before. I again went to statue mode as I watched them do their feral cat thing. It was exhilarating to be out with them as they did their thing. It's like having a wild safari in your backyard, I love it! I might have to hang out in the car at night more often.


The other night I glanced out the side window and saw this guy parked next to the catnip tree: 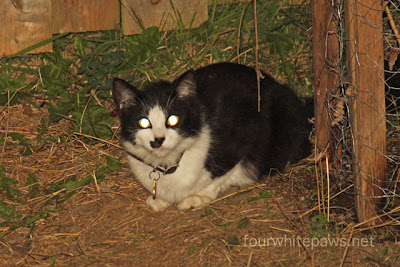 His collar and tag indicate he must be loved by someone but I've never seen him/her before. I started to go out to introduce myself, but rude Oliver attacked our visitor. I didn't see the attack, I just heard a squeal and saw the visiting kitty instantly jump the 6 foot fence. Sadly, that wasn't enough for Oliver, he chased it through the neighbor's yard. Oliver's unfriendly response didn't make me very happy. I'll keep an eye for this collared kitty and maybe next time I can get to it before Oliver.