Thanks everyone for the well wishes for Mr. Oliver. He's back home now and recovering from his ordeal. The vet said to keep him inside for 14 days while he recovers, so he's getting all the inside time he has ever wanted, although it may not be quite as he dreamt it would be since he's secured in cages for most of the time. 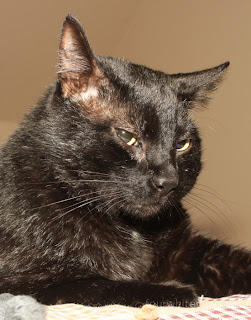 He has a couple of nasty bite wounds. One of which is about half and inch above his eye - way too close for my comfort. The other wound is on his lip, there's a sizable tear and abscess. The vet didn't put in a drain due to the location of the wound. He's supposed to be wearing a cone, but he took it off sometime in the night and I haven't put it back on yet. I figure I'll put it back on if he starts picking at his wounds.

Oliver is in good spirits. He's taking it all like a champ and rarely complains. Above all else he wants to cuddle and purr. Secondly, he really wants to look out the windows, to see what's going on in his yard. Sadly, I can't leave him unattended for one minute for fear he will spray, so he doesn't get much window time.

I have connected together three wire crates to give him some room to move. I have towels covering the sides of the crates in case he decides to mark. I just borrowed one much larger cage and will set that up soon giving him even more room to hang out while he heals. When I have time I bring him on the bed to hang out with me, he knows to stay on the bed, as he's not allowed to explore the room. 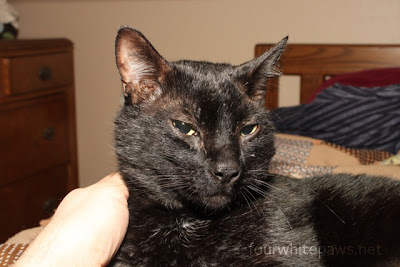 Of course, the big question on my mind is what happens after the 14 days? Do I just put Oliver back outside once more to fight with the interloping cats? I'm not in love with that idea, but his spraying is a real issue. I've noticed his family hasn't been around nearly as much as normal since Oliver has been locked inside. I suppose they would get on without him, but splitting them up doesn't seem right. I'm trying not to fret over that decision and just to take it one day at a time. 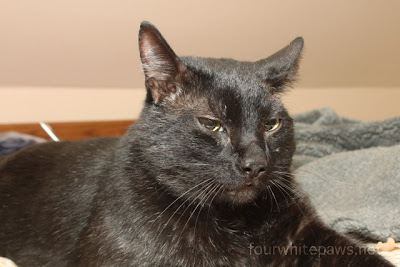 These pictures are all from today, I'm not showing the side of his face that is shaved and wounded. I'm quite squeamish when it comes to such things, so I'll spare you the grizzly sight. I hope he heals all up and doesn't have significant scars on his face. Do they have plastic surgery for cats?! 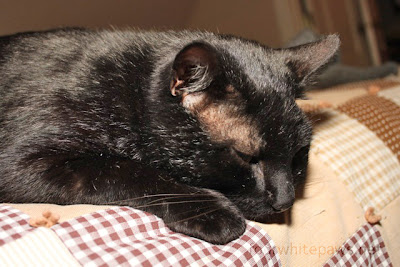 I realized sometime yesterday that this is the first feline injury I've had to deal with. I've enjoyed six years of feline companionship and have never had an injury like this. The closest thing was Theo fracturing his canine tooth, but that was different because it wasn't really a noticeable wound. May it be many many more years before I have to deal with another injury!
Posted by The Cat Guy at 1:48 AM