At the start of this year I shared with you my challenge of trying to keep Oliver and his family safe during the nights. I had started bringing Oliver in at night or locking him on the back porch so he couldn't fight with the other neighborhood cats in the night. The problem was by doing this, his family couldn't be with him overnight. Pierre and MK both adore Oliver but being ferals, they keep their distance from me. So, I needed a solution that would allow Oliver to be locked away and yet would allow Pierre and MK to visit at their will.

I discovered the SureFlap Microchip Pet Door, which is a programmable pet door. It can selectively allow cats to enter by scanning their microchip as they stick their head near the door. And it has curfew mode, where you can program a time that will allow authorized cats to enter but not leave again until the pre-programmed time. My hope was that this would solve my problem. They are a bit pricey, but after saving all year, guess what I got?!

Introducing the latest bit of technology installed on Oliver's back porch - the SureFlap Microchip Pet Door! 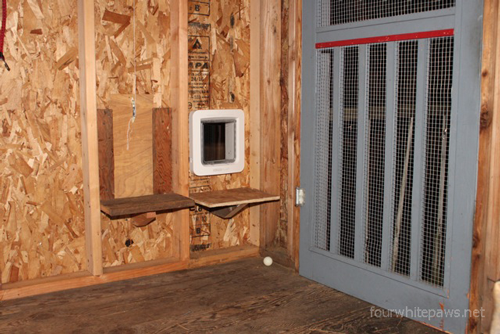 I installed it through the wall, next to the existing, old-school guillotine cat door. I left the existing door because I wanted options and I had the space. 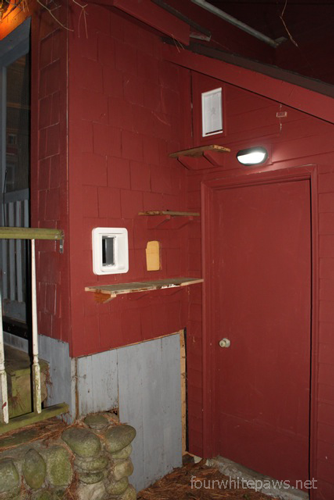 On the outside, I installed a larger shelf so the cats could access both doors and have room to navigate around the flap that would swing out on the SureFlap. 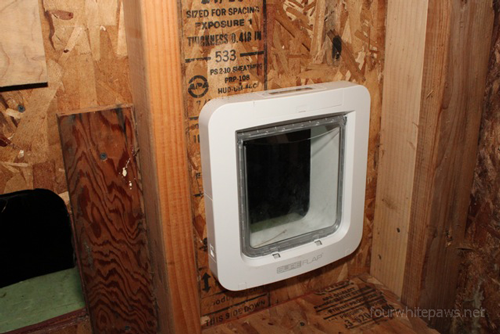 The manufacturer makes a smaller model called the CatFlap, but it doesn't have the curfew mode and it's made for a small to average size cat, which means it wouldn't fit Oliver! They also make what they call a "Dual Scan Cat Door" which is the same size as the CatFlap but has the ability to scan microchips both coming and going, so you can program which cats can enter and which can leave. The Pet Door only allows you to selectively choose which cats can enter. The idea is to keep undesired cats or raccoons from coming into your house. I wish they made the Pet Door but with Dual Scan option, that would be the best choice. 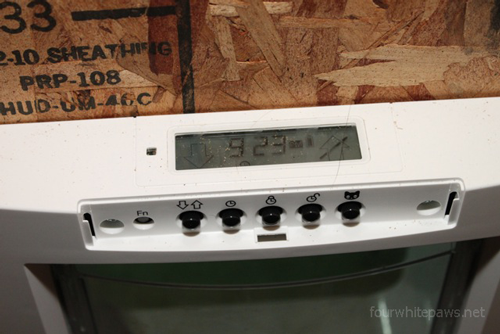 Programming the unit is fairly straight forward. It comes with a large manual, but the bulk of it is the same information presented in multiple languages.

The door's memory can remember up to 32 different microchips, wowza! I think that means I can get more cats! Oliver is already microchipped, but I haven't gotten Pierre or MK chipped yet. Thankfully, the door has the option to function as just a non-discriminating pet door with curfew mode, with this setup any animal can enter at any time but animals can't leave during the programmed curfew time (8:30pm to 6am). I'm still planning to get MK and Pierre chipped so I can use the scanning feature, I just need to gather the gumptions to trap them and get it done.

Installation was fairly easy. The challenge was going to be how to teach feral cats to use a cat door! When the door is closed it has strong magnets that pull the door to the plumb position, so the cats have to push hard enough to overcome that magnetic pull. My regular cat door has a magnetic closer to but this one is way stronger, which is great for making sure the door is in the proper place so the locking mechanisms can function correctly. 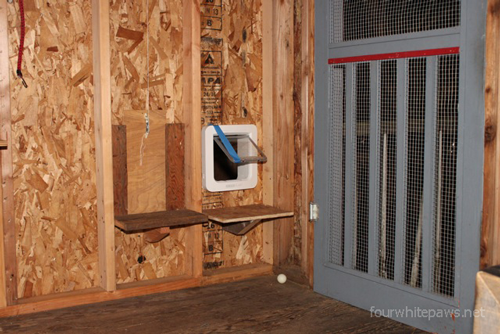 I started by taping it open like shown in the picture. This would allow the cats to get used to the feeling of it rubbing their backs as they passed through. Each day I used a bigger piece of tape making the cat push against the door more and more. I also taped a string to the door that went up and over to the other side of the room, this way I could open the door from the mudroom and encourage the cat to try coming through.

Pierre figured out the door the same night and has had no problems pressing his head against it to open it and push through. MK has tried but still hasn't managed to figure it out. After being locked in someone's garage for a week last July he's gets very anxious about being locked away somewhere, so I'm guessing he's figured out that if he goes through the door it will result in him being locked away, which probably curbs his enthusiasm for trying to come in. I haven't seen Oliver use the door yet, so I'm still not sure if he knows how to use it! During the daytime, I just open the old guillotine cat door so everyone can enter and exit at will.

Now, before I go to bed for the night, I'll go out and secure Oliver on the porch. Then it's just a matter of time before Pierre lets himself in, locking him in with Oliver for the night. Pierre has let himself in every night since I have installed the SureFlap! This makes me very happy. 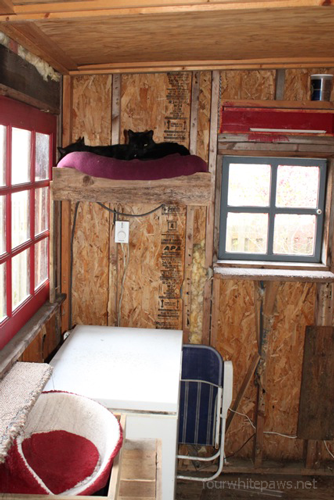 Thus far I am very happy with my SureFlap Microchip Pet Door, it works awesome! It's well built and feels sturdy. It operates on 4-C batteries, which they say will last about 6-months. My complaints are really just nit-picking - I think the instructions could be laid out better in a way that makes it easier to figure out the basic operations and I wish they had the option for using AC power in addition to battery power (like the Pet Feedster I recently reviewed). And as I previously mentioned, I wish they made a Dual Scan version of the Pet Door. I've read that SureFlap provides awesome technical support, but so far, everything has gone perfectly, so I haven't needed to talk with them. 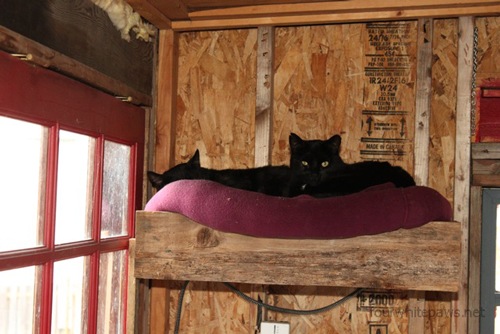 I LOVE coming out in the morning and finding Pierre cuddled in with Oliver. Seeing this every morning has made me feel really good about spending the money to buy the SureFlap Pet Door, it's been totally worth it. I so hope that MK gets comfortable using it too. Maybe soon I'll come out and find all three of my boys safely secured on the back porch for the night.

The fully enclosed back porch currently offers three heated bed options, but with the temperature falling to crazy cold recently, I've started to think it's time to insulate and finish off the back porch so Oliver and his family can truly stay warm in a heated and insulated space. The heating pads do a great job keeping their tummy side warm but their topside gets chilled from the freezing cold air temperature. Hmmm, I think I see my next project calling my name...