Home for the Holidays

It's that time of the year again, the time when I spend my weekends at the annual Home for the Holidays cat adoption event, hosted by the Community Cat Coalition. This year I have three cats who are looking for their forever homes.

This year we are in a different, much smaller space. The event organizer somehow gets prime vacant storefront space donated for us to use for the month of December. This year we actually have two store fronts, one for cats only and the other has dogs and santa photos. 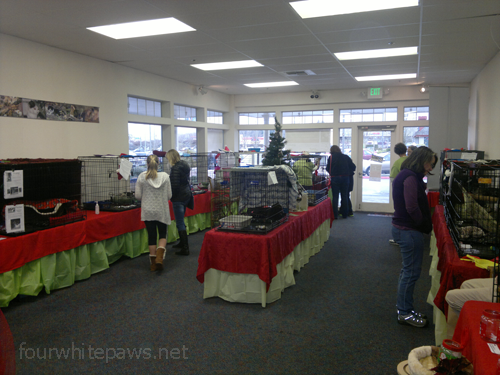 As usual, there are lots of cute kittens and adorable cats looking for their forever homes! It's hard not to take home more cats!! All the cats are rescues, usually from independent trappers doing TNR. The CCC hosts this annual event to give the independent trappers an additional avenue for placing rescued cats. 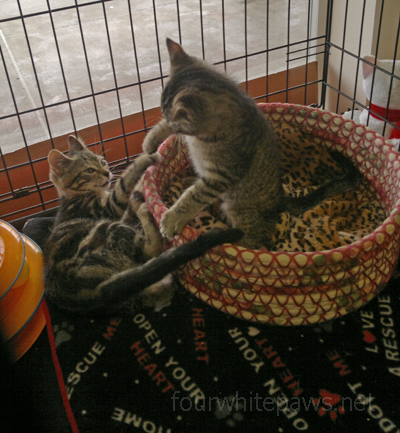 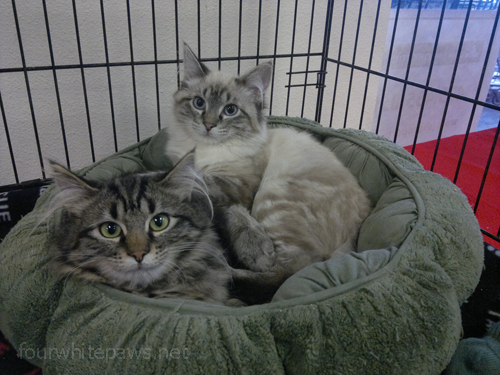 These two siblings, Mork & Mindy captured my attention. They are shy and gorgeous!
I brought Bert, Tramp and his pal Patches. Tramp and Patches were the scaredy cats of the event. Tramp is timid, but poor Patches did her best to hide behind Tramp! These two are bonded and thus being adopted out together.
Over the course of the day, I slowly pulled the blanket back.
Bert was totally chill. He was more bored than anything. It was nice finally having a cat that wasn't freaked out. The first year I did this event, I had Hershey and then last year it was the six kittens - all of which were terrified. This year, Bert, was a rock star! 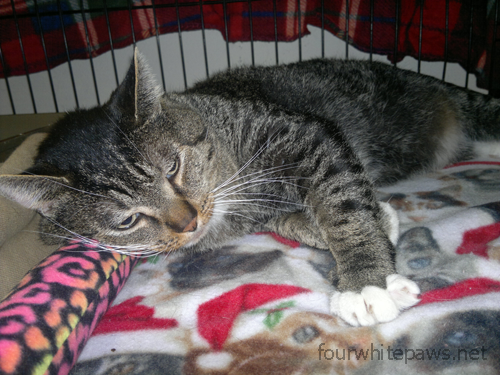 By Sunday, Bert was quite bored!
Tramp did noticeably better the second day, he even allowed me to pet him without hissing!
And here is pretty Patches, she's adorable! and shy!
There were only a few adoptions over this weekend, but I was very pleased with how Tramp and Patches acclimated to the space. They will return next weekend as veterans and will present much better.
I am an introvert by nature, so going to these events is usually pretty draining for me. There are lots of people to talk with about their cats and what kind of cat they are looking for. I do like talking about cats, so that's a plus, but it's just a lot of being "on" and my day job, where I get to hear a lot of hard stories of people hurting people, requires that I be "on" all the time too. So, it was refreshing to come away from this weekend with a bunch of positive energy after meeting some amazingly awesome people.

Who knew Fourwhitepaws' cats had a fan club?! A few families who had come to last years event, searched to find the new location of this years event and surprised me! They love cats and wanted to stop in to check out the kitties and to visit me and hear updates on last years kittens. One couple last year had expressed interest in Felix (now known as Bear), but after talking more, we realized he wasn't the best fit for them at the time. Even though they didn't get the kitten that had captured their heart, they wanted to support my cat rescue work by gifting me with a generous donation and this year they gifted me with an even more generous donation. Wow! I learned they are faithful blog followers, as they knew all about Bert! (Hello - you know who you are! Thank you!! Thank you!!) Meeting such kindhearted, generous people really does a lot to restore my faith in humanity.

And the family that first adopted Felix and another kitten from last years event but ended up returning them after realizing they weren't really ready for kittens, also stopped by to visit me. The kids had really fallen in love with the kittens and have been asking about them all year, so the parents tracked down the location of this years event and hoped I might be there to give them an update! What fun! And again, some very kindhearted, lovely people. Kind, generous, fun cat-people rock!
Even though none of my cats got adopted, it was a fun weekend of hanging out with a bunch of cat-loving people! I'll be back next weekend and maybe more kitties will find their forever homes!
Posted by The Cat Guy at 9:00 AM