I've been absent for a time. Depression has once again been having a way with me, which makes many things more difficult.

On the kitty front, it's been a good season, although Marvin is back in a space of once again fighting for his life. He was seeming off last week, so we took him to the vet. We learned he has hypertension, most likely as a complication from the kidney failure. The vet wanted to do blood work but was unable to get a sample because Marvin was so cranky and resistant. He's so little that using a lot of force to restrain him could easily injure him and his little heart is so fast right now, they had concerns of stressing him too much into heart attack. He's showing signs of retinal-detachment, so he's on his way blind if we can't quickly get his blood pressure reduced. 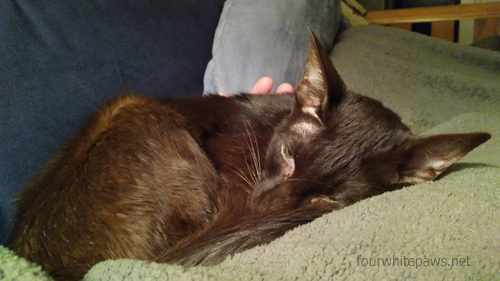 I'm taking him back to the vet today, where they will try a pain medication with sedative effects and then try to get the sample. Once we know more of what's going on we can see options. It's hard seeing him so uncomfortable.

The people at the vet's office love him, which is such a gift. They really enjoy his strong personality. One of the vet techs fell in love with him but then later moved away to Wyoming. She has followed his progress from afar and even sent Marvin a Christmas postcard! 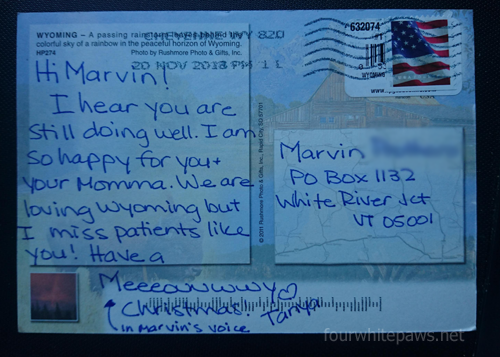 I like our vet and the people there, but I'm really struggling with the rural vet scene. Before we moved out of the city, we lived next door to a 24-vet that had everything in house. Now, trying to adjust to a vet that is 8-5 and has just the basic diagnostic offerings has been tough. Even sending lab work out here takes forever, which is tough, when I'm used to having the results the next day. Having had such a high level of vet care as our standard, suddenly working with what we have available here feels barbaric. I'm grieving the loss of the amazing gift we had.