I picked Nahum up from the emergency vet on Wednesday morning and brought him to our regular vet for him to spend the day there. They did some more diagnostics, including x-rays and discovered some areas of concern. We talked about getting an ultrasound and thankfully, the traveling ultrasound vet happened to have an open slot for Thursday morning.

I came home for lunch on Wednesday to this scene: 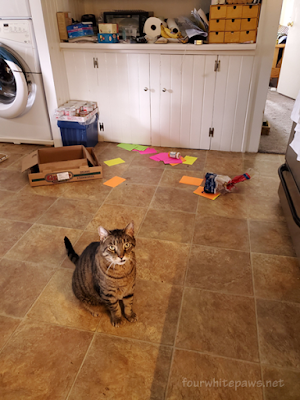 Poor Theo has been so anxious with Nahum gone and unwell. He counter surfed, made a big mess and tried to get into the double wrapped gluten free bread. Theo, like the humans in the family, are stress eaters. He loves bread and uses food for comfort - he fits right in here. His obsessive eating behaviors have actually tamed down over the years, but when he gets stressed, they resurface. 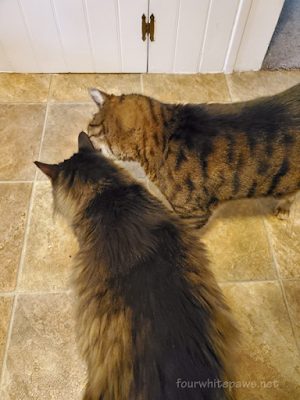 When I brought Nahum home Wednesday evening, Theo was so happy to see him! He was right there to greet him and welcome him home. 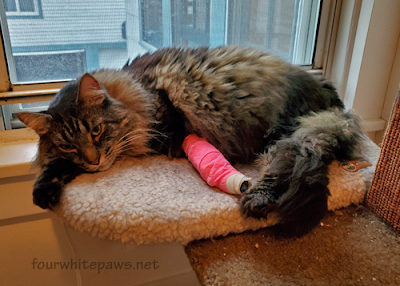 I kept a very close eye on Nahum all night. I woke many times in the night and got up to look him over to make sure he was ok. It's gonna take some time before I can leave him unattended and not be an anxious mess. The image of his comatose body laying on the floor is burned in my brain and I've been having flashbacks about that moment. When I described find him to the vet tech I broke down sobbing. I was grateful the tech was understanding and kind.

The preliminary ultrasound report indicates both adrenal glands are enlarged, nodule on the spleen, and signs of intentional disease. The working theory for the diabetic symptoms is Cushing's Disease due to a pituitary gland tumor. We will get back some other test results tomorrow that may narrow down the diagnosis. Meanwhile, the vet has referred us to an Internal Medicine Specialist and an MRI at Tufts School of Veterinary Medicine. 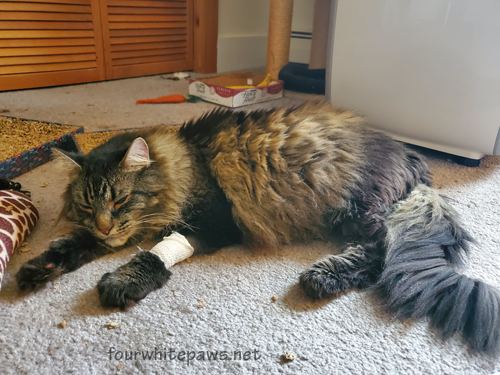 Of course when I hear all of this information, I immediately think of Willow. She had a very fast acting brain and nasal tumor that caused all sorts of weird symptoms and ultimately it was faster at causing problems than we could orchestrate treatment. Nahum's symptoms are different, but he's still potentially got a tumor growing around his brain, and it feels like the symptoms came on quickly. I'm trying to not jump to conclusions, but it's really hard.

Tonight we took our first glucose reading and gave him a more conservative insulin dose, per the vet's instructions. I think I'll be getting up in the middle of the night to test his blood just to be sure. He'll be returning to the vet tomorrow so they can keep an eye on him and monitor his blood sugar. Somehow, I'm going to have to figure out how to trust leaving him home alone again. After him nearly dying on Wednesday after being left alone all day, I'm not sure how I'm going to mange that.

Thank you everyone for your purrs and prayers, and for the information - it's been really helpful! I've been taking in a lot of info from www.felinediabetes.com, it's all a bit overwhelming. And special thank you to Connie from www.kittyblog.net for the emotional support through these hard few days. She had perfect timing to text me, "how are things?" right when we arrived at the hospital and the emergency vet grabbed the unresponsive Nahum.

Continued prayers and purrs appreciated.
Posted by The Cat Guy at 8:38 PM