I recently discovered that Nahum loves playing with a crumpled up piece of newspaper as a ball to play with. 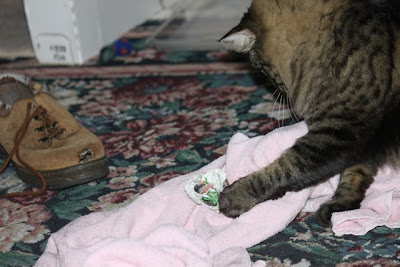 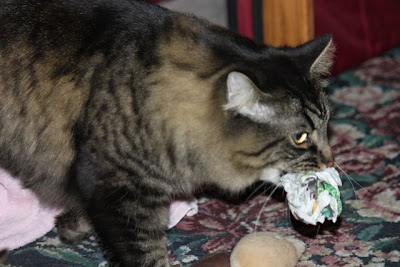 Nahum loves to carry around his toys!
Nahum even plays fetch with the paper ball. I toss it across the house, he runs after it, fetches it and brings it back by way of going through the kitty tunnel! So fun!
Long ago he used to play a lot with crinkly-balls, but then he all of a sudden stopped and hasn't gone back. In fact, when he stopped with the crinkly-balls he pretty much stopped playing on his own - everything had to be interactive toys. It's great now that he has reconnected with the art of solo-play. Hopefully he sticks with it!
Posted by The Cat Guy at 10:14 AM