Frodo: "I wish the ring had never come to me. I wish none of this had happened."
Gandalf: "So do all who live to see such times. But that is not for them to decide. All we have to decide is what to do with the time that is given to us."

- Frodo and Gandalf in the mines of Moria,
The Lord of The Rings: The Fellowship of The Ring


It's only Wednesday and I'm done - stick a fork in me. Please let it be over. This week can not come to an end fast enough. Here are a few of the highlights from this week.

Sunday, I discover there is extensive water damage to the backside of the house between the exterior entry to the basement and Oliver's enclosed porch.This will cost lots of $$ to fix, $$ which is not there. And the rainy season is coming any day now.

Monday afternoon I got the definitive diagnosis about my mom. She has cancer in her lungs. I don't know any other details right now, but that was plenty to knock the wind out of me. About 12 years ago she survived breast cancer. Now she's 78 and has significant heart issues to contend with (prior cardiac arrest, permanent A-fib with an extremely elevated heart rate, etc.) and so cancer on top of all the heart stuff feels very daunting. Prayers for her and my father would be greatly appreciated.

I have some significantly stressful stuff going on at my work which has required a lot of emotional and cognitive energy.

Tuesday night I wasn't able to sleep much. Too much stress from work. I got an email from my TNR mentor, Nancy, stating she has a perfect barn home for Brown Kitty, if I want to relocate him. The idea of relocating him right now, with everything else that is going on in my life feels way too much, however, deep down I think it might be best for him and for Oliver. Will I be able to muster the emotional energy to step into relocating right now? I don't know. Seeing how Oliver antagonizes him really worries me. I really don't like cat fights. Saying goodbye to a beautiful feral cat who calls my yard home feels agonizing.

Wednesday morning, I'm scrambling to get out the door to meet a friend for breakfast. I notice Oliver has a big patch of fur missing from his rump and there's blood. My heart sinks. I so worry about him spending so much time outside with all the dangers associated with living outside. I instantly wonder if he's gotten into a big fight with Brown Kitty. I didn't have a lot of time, so I vowed to look him over more thoroughly when I returned. 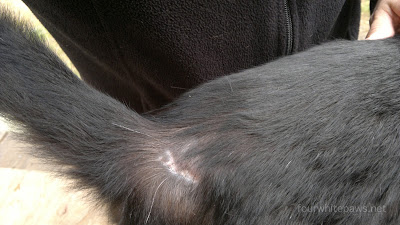 After I returned I give Oliver a thorough inspection. He has a big piece of fur missing. He had cleaned the wound so there was no longer any blood, just missing fur. The very weird thing is, the location of this missing fur is the EXACT location where he was missing fur from some other incident prior to my knowing him. This time around there is a lot more fur missing than there used to be. He's not missing any fur anywhere else and otherwise seems to be in good spirits.

You can see in the very first picture I ever took of him in Jan, 2011 he has a mark on his rump, where he was missing some fur and the fur undercoat was showing.

Here's a fuzzy shot of his butt from a year ago, you can see the same injury in the same location as the current one, only it was much smaller back then.
He lets me touch spot without any problems. I just can't figure out what happened and how come he would have more missing fur in the same place as before. If anyone has any ideas I would love to hear them. I so worry about him. He's been spraying more than usual lately, I'm guessing in response to Brown Kitty's defiance of staying in the yard and eating at the feeder rather than going away, as Oliver wants him to do.

Every other Wednesday afternoon I have a meeting in Seattle, I drive down, attend my meeting and then pick Laura up in downtown where she works and we commute home together. Today the car decided to die right in the middle of the street in downtown Seattle during rush hour. Oh the joy! Of course there were many drivers honking their horns, upset at me for blocking traffic, like I was choosing to park in the middle of the road!

The car was dead. Dead. Occasionally I was able to get it to turn over a bit and it revved high and belched tons of black smoke before it died again about 3 seconds later. After about 15 minutes of blocking traffic I was able to get it to run enough to drive it to the nearest parking space where it made a horrid sound from under the hood. About an hour later the tow truck arrived. And another few hours later I was finally home. 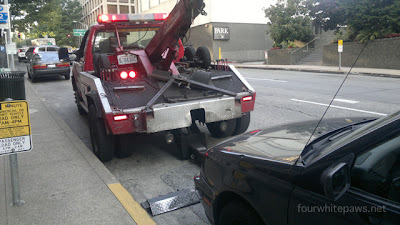 The last time my car stranded me was back in May of 2010 (Theo's big adventure) when I had Theo with me and no carrier, only a harness. Thankfully, I didn't have any kitties with me this time, just Laura, who hopped a bus home so the kitties could get their dinners close to on time.

The car was towed to the shop and I took the bus home. We only have one car, so when it's down, we're down too. I fear the worst for this car, but I can't complain, the poor thing has provided over 256,000 miles (411,992 km) of faithful service. It's been amazingly reliable and a great car. I'm still hoping that maybe it can be resurrected, but I'll find out tomorrow.

The long winter rains of the Pacific Northwest have a way of zapping all my energies and replacing them with endless despair. Mother nature here doesn't believe in four seasons, we go from the sun and nice of summer to endless winter drizzle with no transition. Usually this switch happens in early September.

Tonight, as I was walking home from the bus stop, I had a moment of gratitude. I was thankful that it was not raining. The very same moment of gratitude carried me home on Monday night, even with my heart heavy with the news of my mom. My heart is way overwhelmed with sorrow, grief and worry, and yet thankfully it's not raining.
Posted by The Cat Guy at 2:20 AM