No question last week was a challenging week, it was very overwhelming. My anxiety level was through the roof but things seemed to settle down some over the weekend. I was hoping with the new week would come a fresh start, but then Sunday night the washing machine burned up, so we may be in for another rough week. Time will tell.

Thank you everyone for your encouraging comments and emails. Every one of your kind words helped me get through last week. Thank you! Thank you!

There were actually some positives from last week too. I am so tremendously thankful that Laura and the kitties are all alive and well. Everyone here is in good health. That is a significant positive! Laura took Oliver to the vet on Saturday to get his wound looked over. The vet thought it was an old injury that got infected somehow. I'm not so sure, but I don't have any other ideas and Oliver's not saying. I hope the fur grows back! Oliver was coming close to needing his annual check-up and shots too, so we killed two birds with one stone (figuratively, not literally - no birds were harmed!)

I had a class all day Friday and Saturday. That helped me get my mind off the week that was, although the class is about learning a therapeutic modality for processing trauma and I had a week of trauma. So when it came time to practice what we had learned, it was nearly impossible not to think of the week's events. Thankfully though, the people I was working with were all kind and understanding.

Even though I rarely talk about my spirituality here, my faith is very important to me. It permeates my life on all levels. As I view faith, it's a matter of believing in something that doesn't make sense and something that it beyond my comprehension. This last week in particular has raised all sorts of theological questions as I wonder what's going on in my life on a spiritual level. A lot of things have occurred (a number of which I have not shared here) that really feel bizarre, like something is happening on a spiritual level. Trying to figure out all this stuff feels like trying to navigate a storm with a rusty, scratched and difficult to read compass. Anyway, thankfully, I did not feel spiritually alone in the midst of last week. Symbols of my faith stood out like beacons throughout the week found in unexpected places; the cab of the tow truck, on the city bus, and in a conversation with a fellow student at class.

Friday, while on the lunch break at class, I called a friend and shared the events from my week and to ask if it might be possible to borrow a car for the weekend. Before I could get to the ask, she offered me the use of one of their cars. Tears of gratitude filled my eyes. I held back the urge to sob fearing that if I allowed myself to go there and released that energy it would exceed the duration of the lunch break. Being overwhelmed with gratitude when feeling vulnerable is so much more pleasant than being overwhelmed with more anxiety.

This weekend, when not in class, we were car shopping, which is one of the least favorite things I can imagine doing. We met a handful of colorful used car salesmen and drove a number of cars. After all that pain and suffering, we remain carless And here comes another moment of gratitude, for the most part our schedules don't require a car, so we are able to get to work and most of our routine activities without the use of a car. Meanwhile I'm gathering the parts to get the old car fixed. Hopefully the old Jetta will run again!

I talked with my mom this past weekend, she seems in positive spirits. She has started an estrogen-blocking medication that is suppose to get rid of the cancerous tumors. I hope it works!

My main soothing strategy for getting through this weekend involved play therapy. Playing with the cats that is! I have been putting in every spare ounce of energy lately on various projects around the house, which has left them starved for play. After just a few minutes of playing they all came alive! Like wilted plants getting their first rain after a long drought. Playing with them is always such a great joy.

Nahum being the gentlecat that he is, let his adorable sister take the first round: 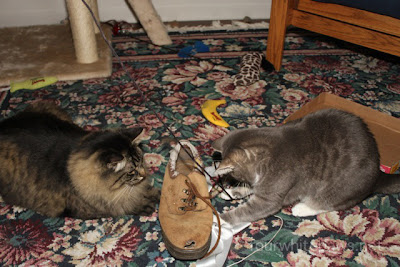 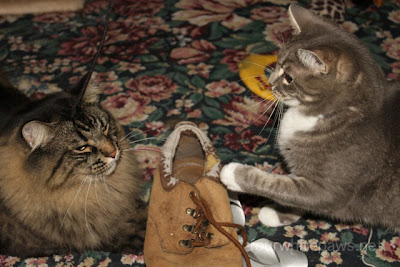 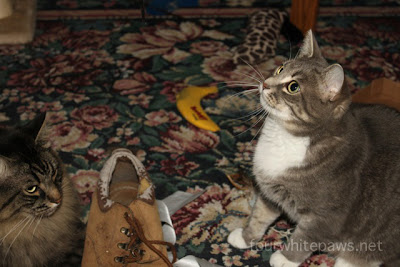 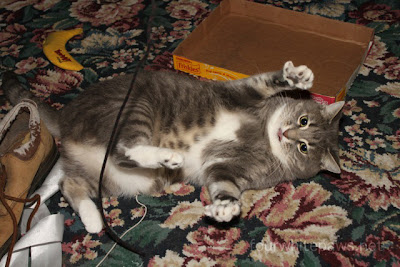 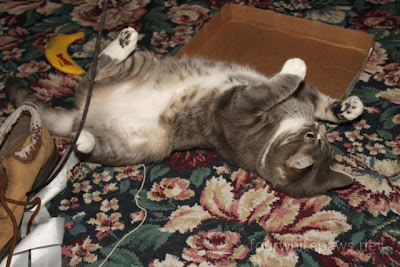 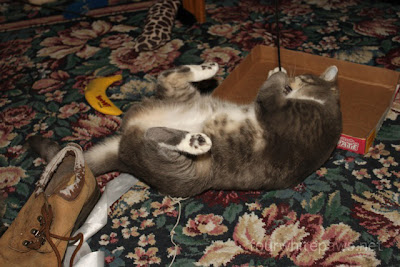 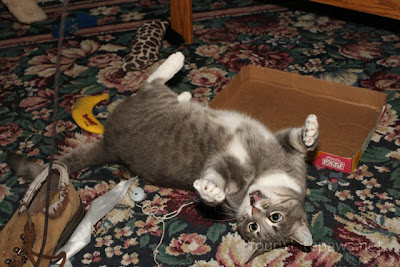 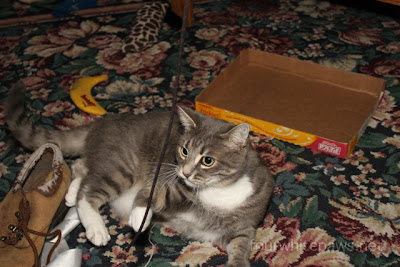 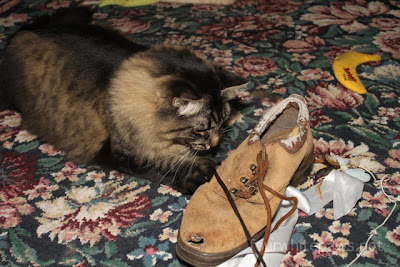 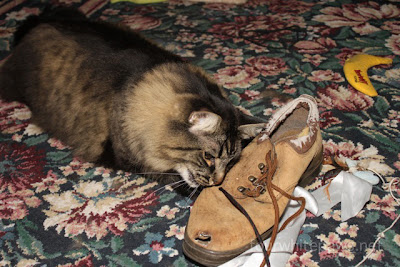 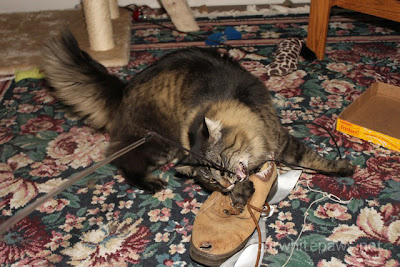 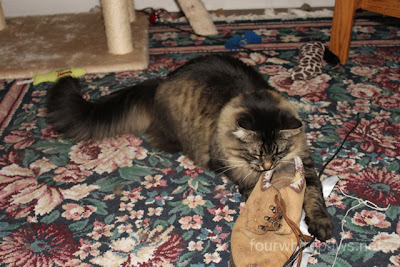 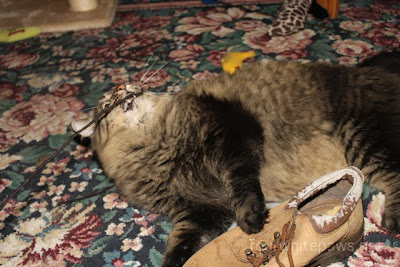 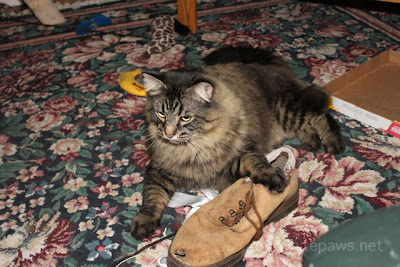 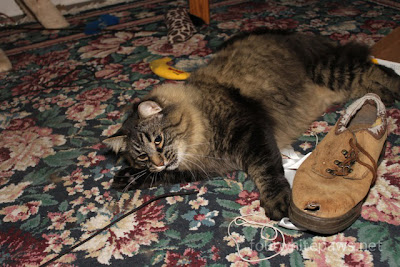 Now Nahum follows me everywhere with his string. It's hard to be overwhelmed with everything when fluffy Nahum is carrying his favorite string over to me so I can wiggle it for him.
Posted by The Cat Guy at 1:40 PM