Hershey had his big adventure today, he got to go to the vet to get examined, poked and prodded! 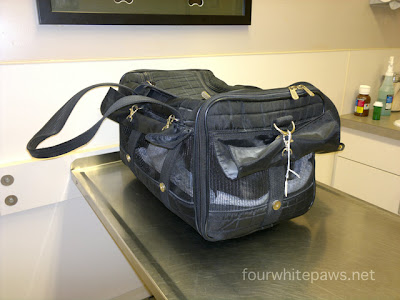 He did great even though he was scared and didn't want to be there. While I was in the waiting room, he pleaded for help from anyone that would listen. No one came to his aide.

The spay/neuter clinic only tested him for FeLV (he was negative) and since I will be adopting him out soon, I wanted to get him tested for FIV as well. I'm thrilled that he tested negative for that too! He got his FVRCP booster shot and the other day I had him microchipped so now he's ready to go! 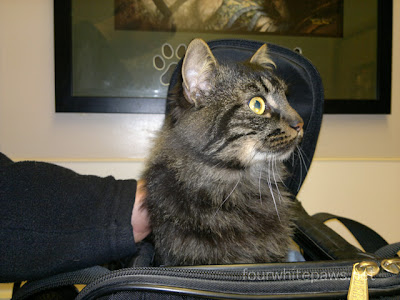 After the Thanksgiving holiday he will be available for adoption. I hope he finds his new home soon as he continues to terrorize the other cats. Yesterday, he had both Willow and Rose hiding behind the tub. When he's not pouncing on the other cats he's either super playful or snuggling in my lap.

I can't tell if he's really trying to play with them or if he's asserting his dominance, but either way, it's not working for any of us. I was hoping Willow would set him straight as she doesn't usually tolerate any nonsense from any other cat, but after a surprise attack from Hershey, she retreated to her safe place. Maybe it would be better for him to get placed in a home as the only cat or with a cat who is as playful and assertive as him.