behold the power of the Willow 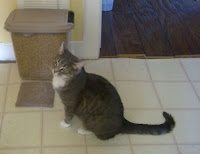 I have always found it difficult to resist Willow's charms, which she frequently uses to her advantage anytime she wants a little extra dinner. She has a way of looking at you that is a perfect mix of sad and endearing. When she senses her irresistible appearance alone is not enough, she steps up her campaign with a few rubs of her head against your ankles while her purr motor revs loudly. If all that doesn't avail her,  she brings out the big gun - she looks right at you, with those sad yet endearing eyes, and makes her little "murp" sound.

Many months ago Laura commented, "You just can't say 'no' to Willow, you just need to resist." Laura has never had a problem saying no to the cats. She seems to do this with ease, like they don't hold power over her. I'm often amazed at her strength. It's as if she conceals a stash of kryptonite.