It has been a while since I have done any house improvements to better the cats. Top on the list was to secure the front screen door. There were two goals in mind for this project.

There have been a pair of raccoons roaming around our yard of late, even in broad daylight, and I want to make sure they stay separate from our cats. The presence of the raccoons has even temporarily suspended kitty tent-time as I am not interested in having the cats tangle with some nasty raccoons, no thanks! 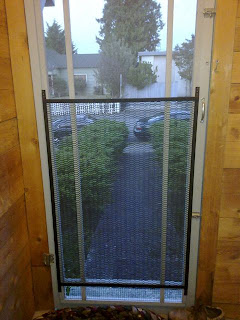 The main section of screen on the door had been pushed out almost completely by a zealous Theo. To protect the screen and prevent the cats from going through the screen, I installed a large metal grate-screen thing. It is beefy, but gets the job done. I was reluctant to cover the small bottom section of the door, because I didn't want to totally impede the cats view. They love to lay in front of the door and watch the world through that little section of screen.

After the installation of the metal grate-screen thing, it didn't take long for Theo to push out the small bottom section of screen. This was a significant problem because, even though the open section was too small for them to escape, it allowed direct contact with other cats or the evil raccoons. So, I replaced the flimsy screen with a small piece of sturdy metal welded wire fencing, which provides a nice relatively unobstructed view but keeps them safe. 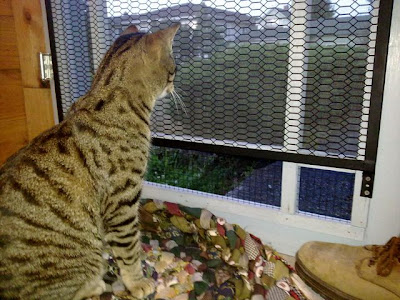 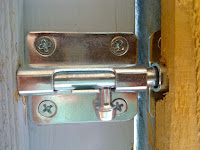 The cats love hanging out on the enclosed front porch. The existing latch on the door was a hook-eye latch that worked fine for keeping the wind from opening the door, but I didn't feel I could leave the cats on the porch overnight or if we went to the store. It was easy to open the latch from the outside so we wanted something a little more secure, ideally something that could only be opened from the inside. The solution was to install two small barrel bolt latches. Now the door is relatively secure and the cats won't be able to escape.

And fear not, the screen door is slated to be painted a better color in the next month or so! The remaining project is the removable cat door for the window. Right now, we leave the window to the front porch open and they can freely come and go. That doesn't work so well in the winter. Of course the winter doesn't stop the cats from wanting porch-time but our heating bill sure takes a hit. So, a removable cat door is being designed for the window. However, before I expend too much energy on this endeavor, a temporary setup will be created to test the cats' ability to utilize a cat door. Once this test is satisfactorily completed fabrication will commence. The other advantage of the removable cat door is it will make the house more secure than just leaving a window wide open.
Posted by The Cat Guy at 1:51 PM

Email ThisBlogThis!Share to TwitterShare to FacebookShare to Pinterest
Labels: Projects