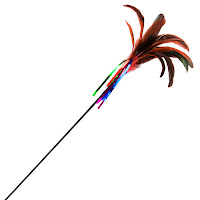 The other day an idea came to me. One of Nahum's favorite toys is the feather toy - which is a bunch of feathers and sparkly mylar strips at the end of a 29 inch long plastic wand. He goes bananas when it moves. When I stop playing and walk away he will drag it over to me, look up me and make his version of a meow. And of course it is impossible to ignore such a display of cuteness, so he usually gets what he wants and the feather's again move to his delight.

Now the problem. Those feather wands are not cheap at $6-$7 a piece and with the amount of play he demands, they don't last long. It doesn't take long for the feathers to get broken off and the mylar strips get ripped off from his exuberant play. Then he is left with a wand with a few feather stubs and a mylar strip or two - pretty lame. We currently have two feather toys in circulation and they are both in sad shape.

My brilliant idea came to me out of the blue - why not buy the materials and make my own feather toys?!  So, to Michaels (craft store) I went to buy the feathers, mylar strips and tape. All for less than $7! I can reuse the wands after they lose their feathers. With the amount of materials I purchased I will be able to make quite a few toys. The only other ingredient I need is glue and I figured the glue gun would work perfectly.

Do you think I can find the glue gun?! Since the weekend I have been scouring the house and garage for it and it is no-where to be found. I came across the power-cord and the extra glue sticks, but the gun has disappeared. Now I am getting desperate, how much longer can Nahum hold out playing with feather stubs on a stick? Do I break down and buy another glue gun or experiment with other glues? Do I buy another pre-made feather toy to give me more time to find the glue gun? Tomorrow is make-it or break-it day - the decision will be made one way or the other - Nahum can suffer no more!
Posted by The Cat Guy at 1:44 AM