a thief in the night

Dinner time is always a bit crazy with the cats. They all approach food differently. Nahum dutifully eats his nuggets then moves on to his bath. Theo inhales his nuggets as fast as possible so he can steal another cats nuggets by shoving them aside and chowing down. I don't think he even chews the nuggets. Willow likes to take her time and enjoy her dinner over the course of hours. She scoops up a mouthful of nuggets from the bowl, drops them on the floor and then eats them one by one. After only a few minutes, she takes a break only to return in an hour or so for another round. Obviously, Willow's approach to eating dinner is not compatible with Theo's. Without human intervention, Theo would eat all of Willow's nuggets leaving her hungry.

The intervention usually takes the form of picking up Willow's bowl of uneaten nuggets and securing it somewhere. Then later, giving her access to it again while blocking a determined Theo back from snatching her food.

Last night as I was preparing for bed, I had an idea. I would bring up the remainder of Willow's nuggets to bed and give them to her when she came up to sleep (she is usually the first cat to settle in for the night on the bed). Seemed like a good plan. I knew I would have to keep the food out of Theo's senses. I tucked the nuggets in a folded handkerchief and placed it under my pillow. Then I laid my head onthe pillow. I figured I wouldn't be hiding the food for long since Willow typically comes to bed shortly after me.

Willow never came up. And I fell asleep.

Through the course of the night I woke-up  twice from the sound of a distant train horn that sure sounded like it was next door. Each time I noticed there were no cats on the bed (they have taken to sleeping on the secured porch). When I awoke in the morning, I found the handkerchief lying near the end of the bed with only a crumb of a nugget remaining. 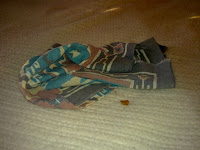 Somehow, Theo sniffed out the nuggets, extracted them from under my pillow (and my head!) without waking me and without leaving any nuggets behind. That boy will go to any length to get food!
Posted by The Cat Guy at 6:41 PM