It's good to be home! I'm thankful for a wonderful trip. The kitties are all happy we're home. Nahum, Oliver and Buddy have been especially clingy, with lots of laptime and snuggles, which I love!

Mr. Oliver is hanging out with me on the bed at the moment (the door's closed to keep the others from disturbing his peace). He sooo loves being inside. He's konked out on the LL Bean fleece cat bed. Occasionally he rolls over wanting his belly rubbed. So sweet! I love that he feels safe and secure with me.


A few notes about the trip. We were just north of Denver when my phone rang. My friend asked if I wanted to take Marble with us. I was torn. I knew we couldn't take in anymore cats and yet the image of Marble's sorrowful and bored gaze burned fresh in my mind. It seems the love and attention I gave him only made him want more, so he started to get more vocal. This guy deserves a home where he will be adored. I somehow mustered the courage to say no and I offered to help him find an new home once I returned home. 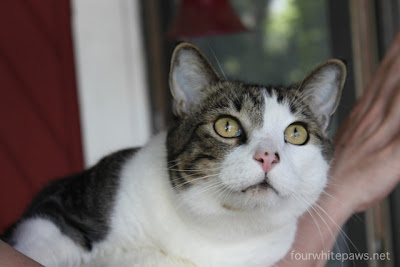 Marble soaking up the attention

The last trip I took to the midwest a few years ago yielded me another cat, Theo. I was very aware of this fact when I declined the offer to bring Marble back. I realized I was on the cusp of setting a dangerous precedent. No new cats!

On the drive home, we decided to route our trip through Yellowstone National Park and then as we got closer we decided to stay the night in the park. We saw tons of buffalo, antelope, a big bear and lots of amazing geological features. What a gloriously beautiful park! 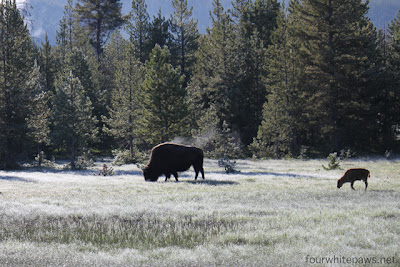 The best part about leaving for a trip is the coming home. I can tell that the kitties all missed us, I know I certainly missed them! I spent many hours watching them on the kitty cams from afar. 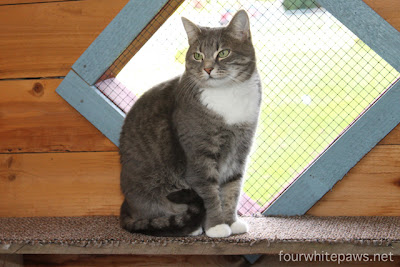 Willow, as lovely as ever 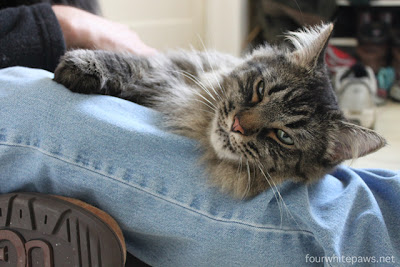 Nahum keeps demanding to be in my lap 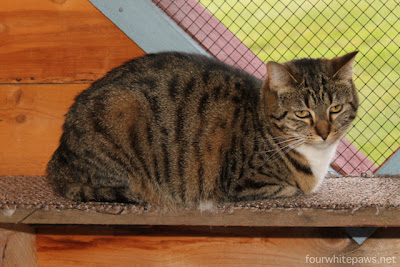 Not sure Rose missed us, but maybe! 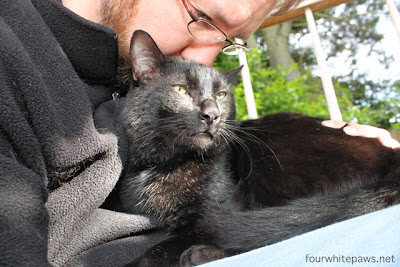 I was most concerned about leaving Oliver, since he doesn't let any other humans get near him. I feared he would think I abandoned him. As the two weeks went on, I saw less and less of Oliver on the back porch feral-cam while I saw more and more of the new tabby.

Oliver was at the house when we arrived home and he was the first to greet me. He purred and purred as I loved on him, he's such a delight! No doubt he missed me. I'm so thankful to see that he's ok, although he does have a small wound on his ear, perhaps from a fight.

Yesterday, I was home most of the day and after a short time of morning snuggles with Oliver, he disappeared for the day. I'm guessing while I was away, Oliver spent most of his days with his family, wherever they hang out. I'm hoping that now that I'm back, he again will call my home his home.

While I worked hard to not bring home any more cats, it seems we still gained a new cat with this trip. The brown medium hair tabby has decided to occupy Oliver's back porch and yard. 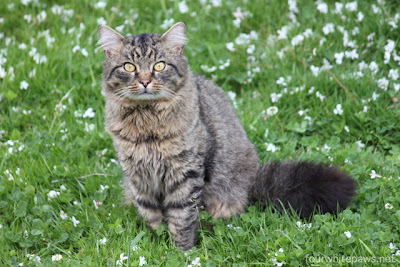 It's not clear to me the relationship between this new guy and Oliver and The Family. Thursday night, as I sat on the back steps with Oliver curled in my lap purring away, the new tabby walked by. He seemed spooked by me and Oliver paid him no attention.

Later the tabby was having some dinners on the back porch and Oliver sat on the steps growling at him and eventually chased him away. And again last night, I saw Oliver chase him away.

And then this morning, the feral-cam shows this: 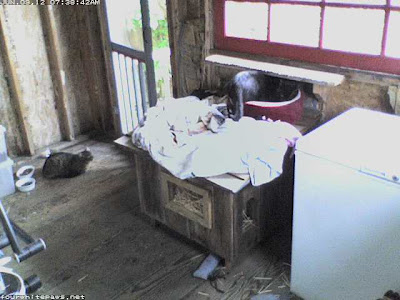 Less than an hour later, when Oliver is inside snuggling with me: 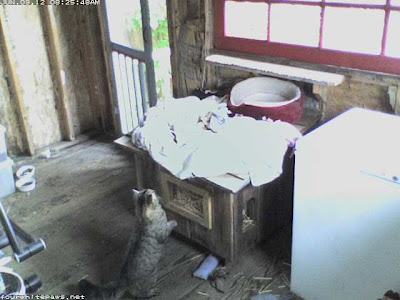 the tabby comes back and once again explores the back porch

The brown tabby seems insistent on sticking around even though Oliver has tried to run him off. So, even though I resisted bringing home another cat, it seems another cat has decided to call my home his home. I'll try to trap him this week so I can learn more about him. Meanwhile, I hope Oliver, The Family, and him become fast friends.
Posted by The Cat Guy at 2:13 PM