afternoon drama and EBK gets a name!

This afternoon I took a short break from work to check in on the feral cam as I sometimes do. Usually, I see Oliver sleeping soundly in his bed and that makes me very happy. Today, I was treated to an action packed soap-opera unfolding on my very own back porch - and I learned that Oliver makes a lousy guard-cat.


Evil Bushy Kitty (EBK) lounging on the back porch with the feral's cat toys.


And sure enough, Oliver's in his his bed snoozing away. As far as I know these two are not friends. Last time I saw them together, Oliver was beating up on EBK for trespassing in his yard. I broke up the fight so EBK could get away.


EBK doesn't seem concerned at all that Oliver is sleeping just a few feet away.

EBK keeps glancing up at Oliver to see if he's been noticed.


and play with the food!

suppose I could take a nap too...

Stretch!! Time to get up.


All that napping's worked me up an appetite!


You see me yet Mr. Oliver?

gosh all that snackin's made me tired...

I might have to make this place a regular hang out...


Oh, Mr. Oliver finally got up.

He finally sees me!

Oliver: Uh, excuse me! What are you doing on my porch??


Can I help you with finding the exit?


Well, if you're not gonna leave, I guess I will.


EBK: I got the place to myself!

Sounds like something exciting is going on out there...


I better go check it out.

Can you tell that I got a lot of work done this afternoon and evening?! Oh well, the work will always be there tomorrow.

As I was watching Evil Bushy Kitty lounge on the back porch over the course of the afternoon, I realized it's been a long time since I have seen him do anything evil. Maybe it's time to remove the 'Evil' from his name and return to Bushy Kitty once again. If you don't remember how Bushy Kitty became Evil Bushy Kitty, you can read all about it here.

As Bushy Kitty was walking away, I noticed he still has a nasty limp on his back right leg. 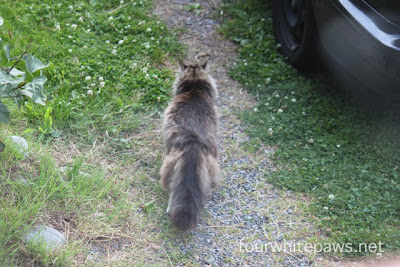 I actually got a little video of him limping, but it's too sad to post.

After seeing him hobbling so much, I gathered all my gumptions and went down the road to the house where I often see Bushy Kitty hanging out. This house has a cute little cat house and an empty pail of kitty litter on the front porch, so I was hoping they could tell me something about him.

I knocked on the door and asked the man who answered if he knew the big bushy kitty who frequented his porch. I learned that he and his family have taken on the care taking role for Bushy Kitty since they moved in a year or so back. He said Bushy Kitty's really old and has been a neighborhood stray for many years. Apparently the children who live in the house have really taken to Bushy Kitty and he's quite friendly with them.

I explained to him about the limp and he seemed quite concerned. We happen to notice that Bushy Kitty was lounging in someone's yard across the road so we went over to him to check him out. He was quite content being picked up and handled by this guy even though he's never allowed me to get near him. This time I got to rub his head a bit - he's really quite sweet! We didn't see any visible wounds, so he brought him inside and said he would have his wife take him to vet to see what's going on. I'll follow up tomorrow to see if there's any news. 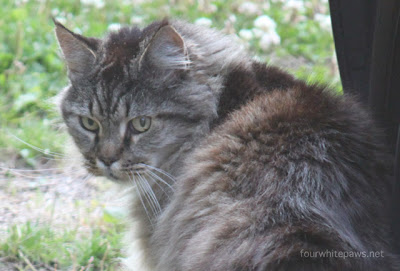 I learned that Bushy Kitty's real name is really Gilbert!