I've got some very happy news to share! There is one less homeless cat in the world!! Sweet Simon has found his forever home!!! Even though it's sad to say goodbye to him, I am so thrilled for him and his new family!

Paddywack hosted an all day adoption event for the Community Cat Coalition yesterday and six cats were adopted! Simon was one of the lucky ones who found his forever home! Woohooo!! 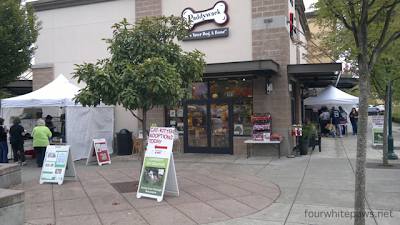 The event was outside on the sidewalk, which made me crazy anxious. Every time I saw someone holding a cat outside their cage, my anxiety level went up as I feared a startled cat darting out of someone's arms and being gone. I calmed my anxiety by putting a harness and leash on Simon which he took too just fine. 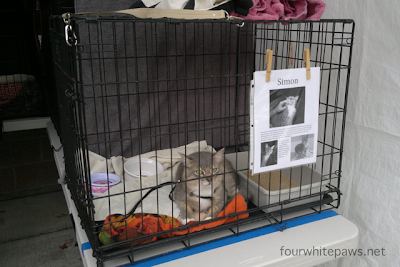 Simon had a nice corner spot and thus got to watch all the people walk by. He took it all in stride. 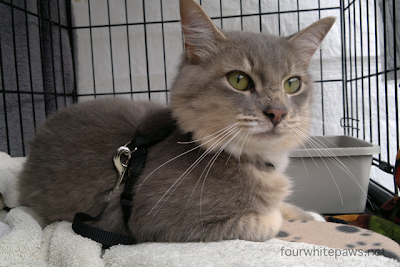 With his unique coloring, he got a lot of attention. People loved touching him as he is super-soft! Simon's new human just happened to walk by - it was love at first sight! She met him and immediately connected with his amazingness but after a short visit left saying she wasn't planning on getting a cat. Then an hour or so later she returned and excitedly said she just had to have him!! As I got to know her through the adoption process, I had a very good feeling that she would be a great human for Simon and Simon a great cat for her! 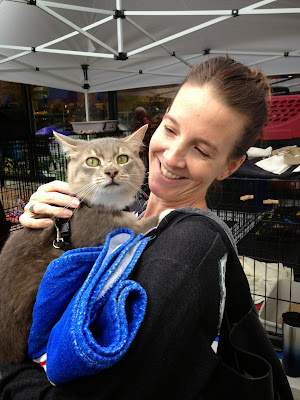 Simon with his new human!

I was thrilled when she offered me visitation rights! I immediately took her up on the offer and Laura and I stopped in later to check out his new digs and to say goodbye. The children in the family completely adore him and Simon was doing just fine with them too. He was hanging out under a bed, not terrified, but with an overwhelmed look, which was appropriate, after having a crazy day and now being in new space with new humans. I laid on the floor and called to him and he came right over to me - I about broke down in tears. In such a short time, this cat had really come to trust me, I had become his trusted human, someone who's presence provided him comfort and now it was time to say goodbye. 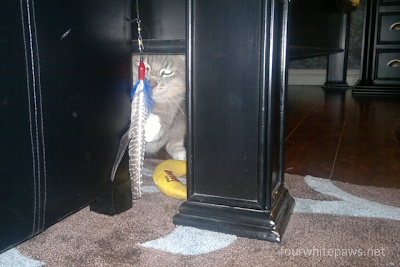 Even though it's hard to say goodbye, I take much delight in knowing Simon will be well loved and cared for by such a kind hearted family. I look forward to future visits and updates.


Simon, you were never meant to be homeless, wandering the streets looking for handouts. Welcome to your new home, I hope you enjoy the overflowing love and attention that I know you will get with your new family. Please know that you will always have a piece of my heart, I enjoyed caring for you in the short time I had with you and I look forward to the next visit, my sweet furry friend.