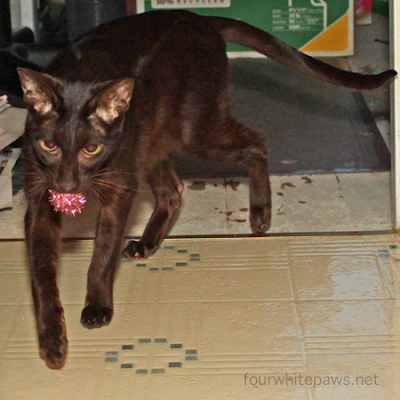 Marvin still can't get enough of fetch! I love having a cat that plays fetch, it's the funnest thing. I also love that unlike playing fetch with a dog, Marvin's sparkle ball remains clean and dry even after hours of play. My friend's chocolate lab played fetch and got the ball slobbery and nasty in no time - yuck! When I'm lying in bed at night trying to fall asleep, Marvin will drop his sparkle ball on my neck, his way of asking me to throw it again! 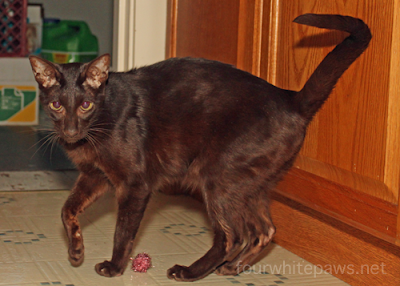 Marvin's asthma is responding nicely to the oral meds he's getting (Pred & Terbutaline). Meanwhile, I'm slowly trying to get him acclimated to the AeroKat, in hopes of someday being able to use inhaler meds. Progress is slow, very slow. 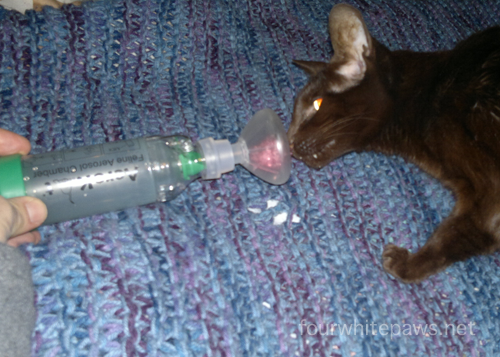 On top of his kidney failure, dental problems, and asthma, he's got another condition that's been going on which is very troubling to me. Every so often, he'll not be able to walk straight and frequently falls down when walking. It looks like what I imagine would happen if one of his back legs was asleep or numb. When this happens there are no signs of distress, he doesn't seem bothered by it at all. Eyes and pupils appear normal, but he's not able to jump without falling - hard. The condition seems to last for about 6-12 hours and seems to slowly get worse in that time and then slowly gets better.

He recently had one of these episodes and it was by far the worst it's been. It's really scary to see him not able to get around. I was deathly afraid he would try to jump and crash, injuring himself. When this is happening he doesn't act or seem any different than normal besides not being able to move straight or stand. This time around, I set up a one-level containment cage to keep him from hurting himself until the condition wore off. 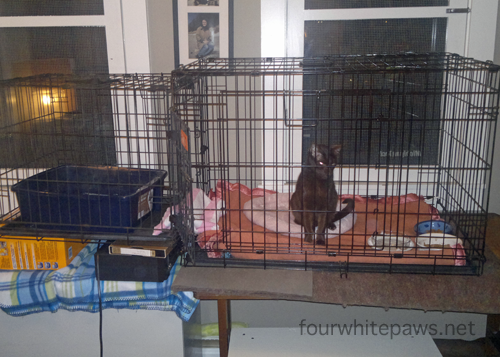 I debated about taking him into emergency, but his lack of distress made me think it could wait. I feared it might be a blood clot or mini-stroke, but figured if that were true he would be in distress. I took him to the vet the next day and of course all his symptoms were gone, thus he appeared quite normal. This was actually the second time I took him in for this condition, but this time with a different vet (not one of the usual vets I see).

Even though I had a video that showed a little of his symptoms, he checked out as being just fine. The vet ran a comprehensive blood panel to look for anomalies but everything came back as expected. She basically told me the same thing my standard vet told me, that we've exhausted their diagnostic capability, next step is MRI. With his other health problems, I don't think I can justify the expense of an MRI, so for now, I'll keep close watch on him and pray. 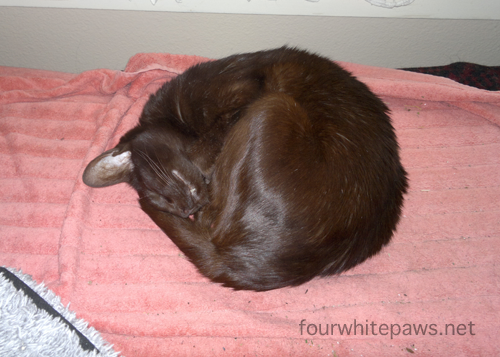 This vet was very afraid of Marvin. She didn't want to handle him alone and asked me to restrain him when she did her exam. When she left to do the blood work, she didn't dare pick him up and carry him in the back (as all the other vets do) but said she would get the vet tech to do that! Later I learned that they have his file marked as an aggressive cat, which is funny, considering he's my therapy cat! He's sugary sweet just so long as you are trying to stick something up his butt or down his throat! He considers those actions violations, so watch out! I'm guessing if I were facing those actions, I might respond just like Marvin! 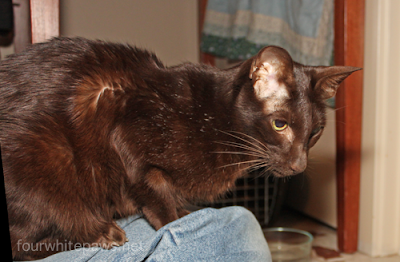 I fall more and more for this guy everyday. He's so little and yet has a huge personality!! 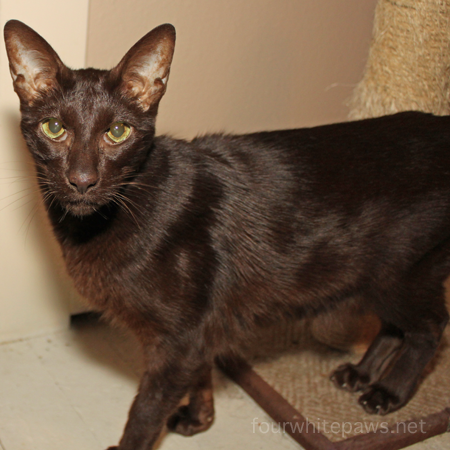