It's been an action packed weekend and I've only experienced one day of it so far!

I got out of bed early on Saturday because I wanted to be sure to release the feral cats in the cover of darkness. I figured they usually only come around in darkness so they would probably be more comfortable leaving in the dark.

The releasing went without any problems. Oliver was there to see them off. As I saw the last one dart out of the yard, I wondered if I would ever see them again, I sure hope so.

In the afternoon, I had the opportunity to attend a TNR class facilitated by The Community Cat Task Force which was formed as a coalition of several local rescue groups. The class covered all the basics of what needs to be considered before engaging in TNR. The handouts alone are worth gold. Here are a few of the many things I learned: 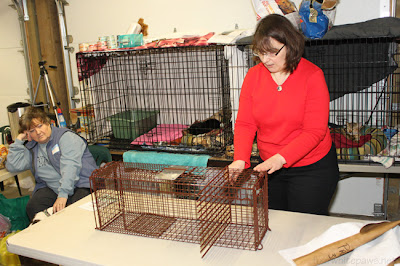 Marianne demonstrates the proper use of the trap divider. Come in
from the side and make sure you go out the other side, otherwise
the divider won't stop the cat, just slow it down as it escapes. 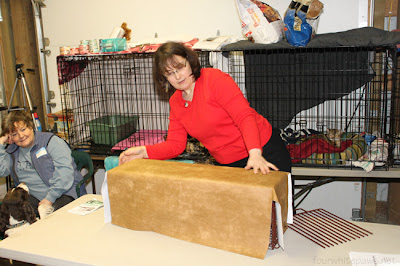 Marianne demonstrates how homemade vinyl trap covers can be used.
I'm interested in this whole TNR thing. It seems like such a really good thing for the community cats. I'm considering how I might get more involved. I like that TNR can involve lots of people assisting in the process - one person may trap, another transport and another do the recovery part. I think I would like to start by assisting some people as they plan, trap, transport, recover and release - to see how they do it. I need some hands on experience in the field and I need to learn how not to get so emotionally attached to the cats where I compromise my boundaries while also somehow keeping my heart open to their plight.

Thanks to Jenny (and Bayley) from Pasado's Safe Haven for hosting and Ruth, Nancy and Marianne for teaching a helpful class and being very generous with giving us lots of bonus goodies.

Meanwhile, in the late afternoon, back at home, I went out before dusk and stocked up the food bowls in the Dining Hall with wet and dry for Oliver and his family. I was guessing that his family wouldn't be back for awhile, but just in case they felt safe enough to return, I wanted them to have as much food as they wanted.

Imagine my delight when later in the evening I saw one of the ferals out there chomping away! I was thrilled that it was back. It got spooked when it glanced over at me and noticed me watching it through the window. Later I saw another one out there eating too, it may have been the same one, it's hard to tell. I certainly slept better last night knowing that at least one of them still trusts me enough to come eat my food.