my war with time

Here it is New Year's day, the first day of 2011. Maybe it's a good day to ponder my relationship with time.

I often find myself at war with time. It seems a rare day when I feel like I am friends with time. Day-to-day this looks like many things. I never have enough time as I am scrambling to get out the door, vacations and weekends go to quickly. Then there are the days that drag on forever, they seem never ending.

Several intense moments of battling time are burned in my memory. When I was courting Laura in college, we endured a long distance relationship for three long years. During holidays and school breaks one of us would jump on the Greyhound Bus and travel to the other. I vividly remember the feelings of intense longing as the day slowly approached of Laura coming to visit - I just couldn't wait for that bus to arrive and for us to be reunited at last. With the longing came waiting, it would be like time slowed down to an agonizing pace and there was nothing I could do to speed it up. And then instantly the opposite would be true. The bus arrived in the middle of the night, we reunited and then even though the visit was three of four full days, it seemed only a few hours later that we were meeting the bus once more and having to say goodbye. It was as if the dam that slowed the flow of time had suddenly burst and now time was flowing uncontrollably fast.

Another major event where I battled with time was May 9, 2009, the day of Max's death. Having had around 8 months of emotionally difficult time caring for Max as his kidney's failed, the day had come to end his suffering. The call had been made and the 4pm appointment scheduled. My heart wrenched in pain as I had only a matter of hours more to be with Max and then never again. It was a mixed experience of time. Simultaneously, the day flew by way too fast and it felt like it was taking forever as each hour passed. I wanted nothing more than to stop time and run away with Max - to both cheat death and time. 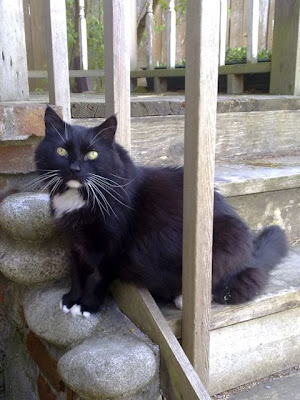 Max, in his last hour of life.

I wonder what it is like to live at peace with time, to rest in knowing that I am powerless in controlling it. What does it even mean to rest in time? Is there such a thing? I suppose it means being present to the moment. That is something I imagine Buddhist monks experience in some far off place rather than someone caught up in the daily rat race of American life.

One of the things that I admire about cats is their ability to live in the moment. They seem to make the best of the moment and then move on. If they even have expectations they are able to quickly let them go and move on. They don't let the past affect their ability to enjoy the present. Willow will seek out a patch of sun to nap. When the sun is covered by a cloud she doesn't sulk she takes it in stride and moves on. I have much to learn.
Posted by The Cat Guy at 7:26 PM