Like every other day, it was late afternoon and the cats were already pleading for an early dinner. I was dutifully ignoring their pleas when I left the house for a short time to run some errands.

This was the scene when I came home. 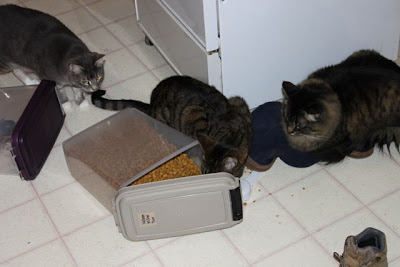 Some-cat (Theo?!) had managed to knock over the latched bin of nuggets so the top would open and the nuggets would spill. Judging on Theo's brick-like stomach and his slow pace of eating (usually Theo eats with a frantic energy), he had probably been eating away for a long time. Nahum and Willow were only passively interested which means they had already eaten their fill.
Posted by The Cat Guy at 10:46 AM