Tension remains high around Buddy. He hasn't warmed up to the other cats, even though ambassador Nahum has tried on many times to reach out to him in the spirit of kindness and love. 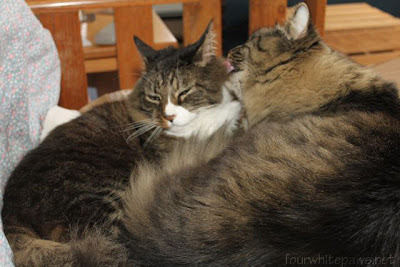 Buddy walks around grumping at the other cats when they get near. He has also taken to putting his teeth to Theo's neck and swatting at him frequently. He seems to target Theo with the hostilities more than the others, I am suspecting it is because Theo often tries to steal his treats and snacks and Buddy doesn't take kindly to that. So he holds onto the anger until just the right moment, then WHHAAP! 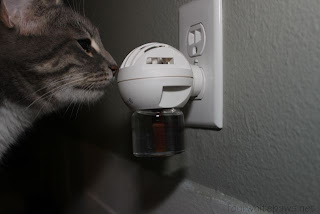 I was hoping in time things would settle, but that doesn't seem to be occurring. So, I thought maybe some Feliway might calm the tension.

The Feliway has been active only about a week now and so far I haven't noticed any change. It may take time and I'm sure the effect is diluted by having the windows open.

It's hard to tell what Buddy's play-style is. For all I know he is trying to play with Theo by swatting at him and chomping on him. Long ago, Theo used to chomp on Willow all the time and it seemed to be the way he "played" with her. Thankfully, he doesn't do that much anymore.

Even though it's expensive, I'm gonna keep trying the Feliway for a while and hope for the desired result. 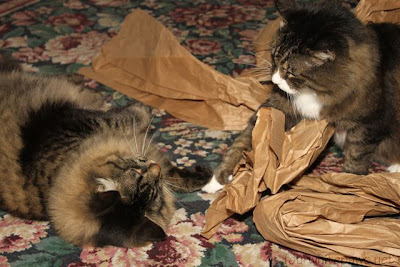 I think in this picture, Buddy is actually initiating play with Nahum. Nahum is the perfect cat for him to start playing with because he is very cautious and usually plays very gently. Just before this picture, Buddy pounced on Nahum from behind the packing paper, something Nahum loves to do with the other cats. Maybe this is the start of something wonderful.