This post was just hi-jacked by kittens. Gosh, I never thought I would be writing about kittens... more on that in a minute. The post was originally going to be about how I played with BK this morning and he loved it. I brought a sparkle wand out on the porch and wiggled it for him so he could chase it, sure enough, he had a good time. 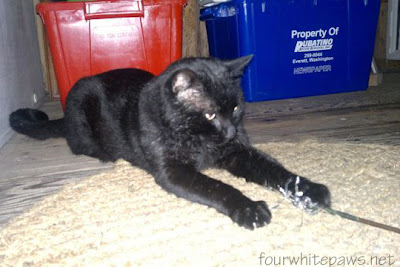 Right after our snuggle/play time, he walked across the yard, snuck up on a leaf and pounced on it. Then he tried to pounce on a squirrel, which got away. So next. he pounced on a branch and then zoomed across the yard. It was like I had unlocked his playful nature and he was letting it all out! Such a delight to see. 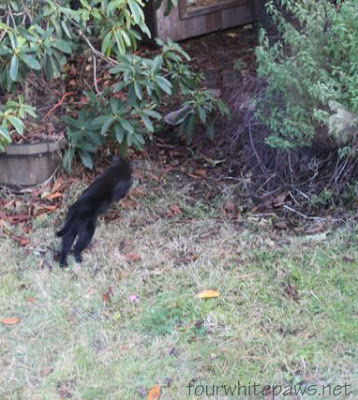 Then tonight he gave me the ultimate surprise.

When I came home from work late this evening, it was dark. Laura said she had feed BK already and saw him hanging around the back porch, waiting for me. So, before going to the back porch, I did as I frequently do, I shined a flashlight out into his house to see if he was home. I about fell over when I saw two little black fuzzy kittens hanging out in his house! What?!?! I didn't trust what I was seeing, so I called for Laura to come see. She concurred, there were two little kittens in BK's house!

I freaked out! I had built the house for BK  - so, where did these kittens come from?! They weren't there this morning! In a few minutes mama showed up, a thin, sleek, black cat. She was hanging with the kittens in BK's house. I wondered how BK might respond to having all these foreign cats occupying his house. Would he chase them out?

I went out the back looking for BK and he came right up to me. He settled in my lap and I asked him a thousand questions about these new cats. He ignored all my questions and took a short nap in my lap. He protested when it came time for me to get up.

After filling up the dinner bowl at the dining hall for the second time this evening, I noticed mama cat and one of the kittens ambling over to the dining hall. BK was sitting right there and didn't respond at all. Apparently, BK and mama are good friends. Minutes later I saw BK hanging out with mama and the kittens in the yard. 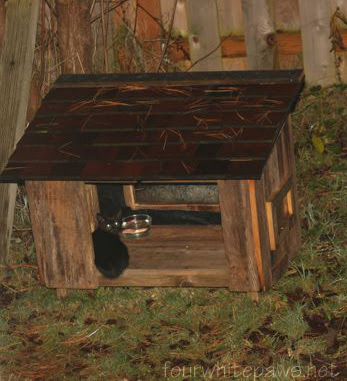 One of the kittens at the dining hall

BK must have communicated to his lady-friend that he had secured a nice heated home for her and the kitts. I'm guessing the kittens are about 5-6 weeks old. They waddle clumsily in the yard and have been eating the dry kibble I put out. Both kittens are jet black like mama and BK, I noticed at least one of the kittens has a little faint white spot on it's chest, just like BK!

Not knowing what to do, I texted Annie, the person who cat sits for us. She is both a licensed vet tech and an experienced cat rescuer. She graciously responded to my frantic texts with helpful information and advice. Tonight, I don't need to do anything more except to keep the food well stocked. So, that's what I have been doing.

I feel honored BK would trust me with his family. I was under the impression that male kitties didn't play a role in the upbringing of the kittens. BK is certainly no dead beat dad! Now, I hope I can figure out how best to take care of them all. Annie thinks mama might bring other kittens to BK's house if they are still alive. So, maybe when I wake up tomorrow, BK's house will be brimming with more kitts! Thankfully, Annie has offered to help me through the process of trapping them which I am immensely thankful for because I have no idea where to start!

If anyone has any pointers or advice, I would love to hear it. Thanks in advance! I'll keep you posted on what happens next. 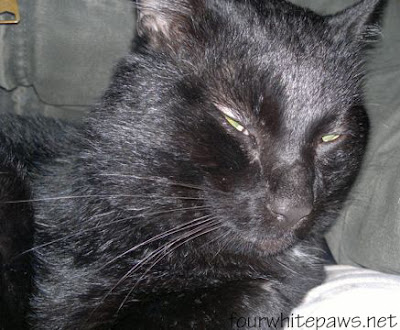