This past weekend was gloriously sunny and warm, a rare treat for February. I spent as much time futzing around outside as I possibly could. I'm aways at war with the pesky blackberry bushes, so I took the chance to pull up as many as I could find. Oliver, being my resident outside cat, was with me the whole time. Every so often, I took a break from my futzing to play with or love on him - he so loves to play or be held.

Getting good pictures of Oliver can be a challenge. I often like to get my kitty pictures down on kitty level, but when I kneel to get a shot of Oliver, he abandons his toy and comes running over for loves! 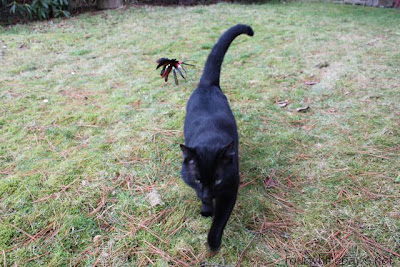 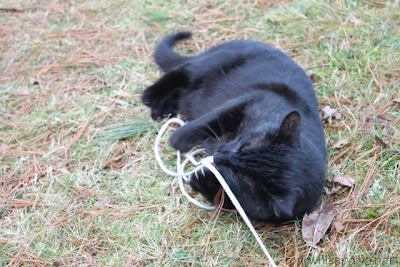 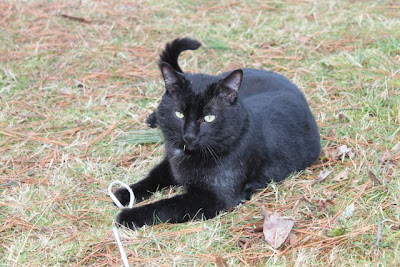 Posing with his string prize 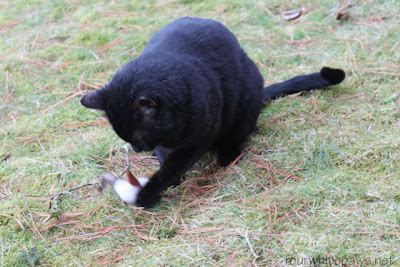 Playing with the birdie 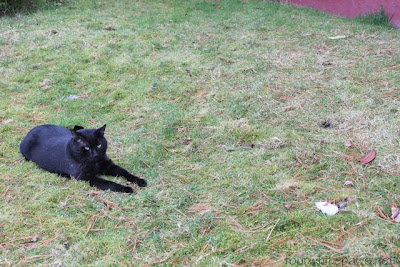 Preparing to pounce on the birdie 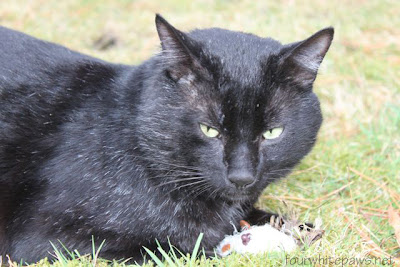 Posing with the birdie prize.

I really liked having an outside cat while working in the yard. He was always right there with me or nearby. For a while now, I have thought it would be nice to have kitty company when working in the yard, but I've never let any of the inside cats out for fear they would run after a squirrel or something and never come back. I don't have to worry about that with Oliver, he's not going anywhere.

With the warmer weather and more frequent sun, the inside cats have been really wanting to get out on their enclosed porches. But porch time has been severely restricted due to Oliver's presence. Buddy goes too ballistic when he sees Oliver. I'm in need of a solution, as Oliver continues to lobby harder to get inside. My heart and my mind have been wrestling with Oliver's future.

I've known that my heart quickly and firmly attaches to animals. When I was around 12 years old, I visited my brother and sister-in-law who worked at a State Park in New Hampshire. I remember spending a good chunk of that summer day hanging out with them when a big friendly bushy dog appeared. I had so much fun playing with that dog, that when it came to leave I was devastated to say goodbye. I so wanted to take that dog home with me. It felt like I was having to leave my best friend behind, when in reality, we had four wonderful Chihuahuas at home and I had only known this dog for a few hours.

My mind tells me that Oliver would be happy inside with a family where he could be the only cat and get loads and loads of attention. I know I could try to introduce Oliver to the inside cats, but I have a hard time imagining it working well without Prozac for at least Oliver and Buddy (and maybe me!) - and five cats already feels like too many, six cats is certainly too many.

My heart doesn't want to part ways with Oliver. The only time I have ever parted with a dog or cat was when it was going to be put to sleep. Voluntarily giving up an animal companion feels unbearable.

I know that if I want to get more involved in TNR and rescue type activities then I need to find a compromise between my heart and mind. My earliest childhood dream was to have a huge plot of land so my mom and I could rescue all the stray dogs [and cats]. As a little tyke, I knew nothing of the realities of limited resources (income, space, time, etc.). It's frustrating being finite!

I fear my path will lead me to step further into heart-pain as I work to say goodbye to my newest kitty friend. I think it will help if it's possible to arrange visitation - if I can see that he's being well loved and cared for then I imagine my heart may not be quite as freaked out. 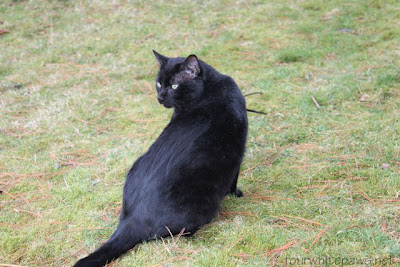 Meanwhile, last night on the walk home from work, I did get the chance to rescue a loose dog. I was walking along a very busy road when out of no-where appears this sweet Golden Retriever. There was no one else around. She came right up to me and flopped over to have her tummy rubbed! Seeing that no one was around, I started calling the four different phone numbers on the tag attached to her collar. The third number connected with her owner who was very thankful to have gotten his dog back. And thankfully for me, I didn't get attached to this dog!